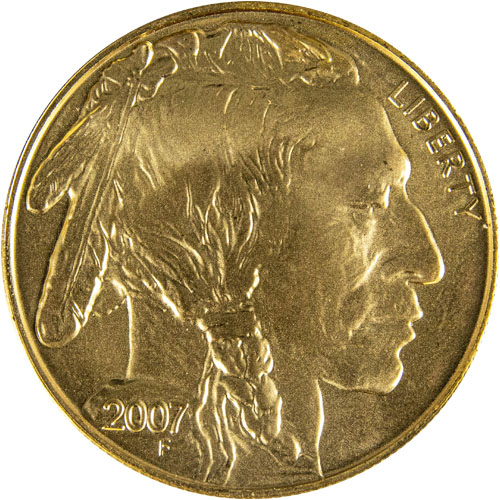 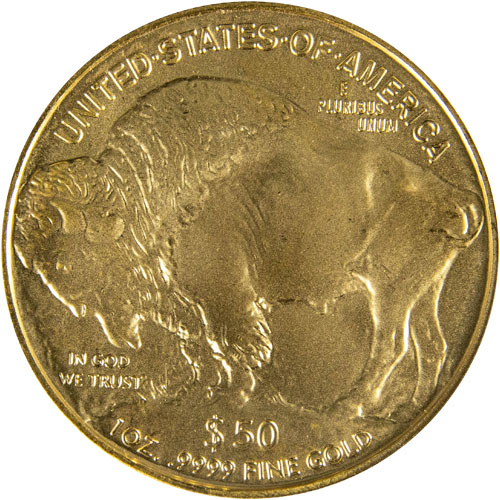 This is the second year of the American Gold Buffalo coin series. Again they were offered only in the one ounce size, in both bullion and proof coins. The Gold Buffalos are the first and only coins the US Mint has produced in .9999 pure gold (24 karat gold). With their weight, content, and purity guaranteed by the US government, the Gold Buffalos are investment-grade gold bullion coins. As was expected, sales of the bullion coins declined about 60%, falling from 337,012 in 2006 to 136,503 in 2007. They are struck at the West Point Mint. Right now, JM Bullion has the 2007 1 oz American Gold Buffalo Coin available for purchase.

The American Gold Buffalo coins are composed of .9999 pure gold – this marks the first time the US government has produced 24 karat gold coins. Other countries had 24 karat gold coin offerings, for instance, Canada and China, and the US felt it was time to keep pace with them. One of the many parts of the Presidential $1 Coin Act of 2005, mandated the production of a one ounce .9999 pure gold bullion coin, with a face value of $50, and that was struck from gold from newly mined domestic sources. The American Gold Buffalo coins – both bullion and proof – are struck at the West Point Mint, however, the bullion coins do not have a mint mark.

The obverse of the Gold Buffalo features a Native American Chief profile. This Chief profile is believed to be a composite of profiles of 3 Chiefs:  Chief Iron Tail of the Oglala Lakota, Chief John Big Tree of the Kiowa, and Chief Two Moons of the Cheyenne. The design was created by James Earle Fraser for the Indian Head or Buffalo Nickel, which circulated from 1913 to 1938. Fraser’s Buffalo Nickel design is thought to be among the best designs of any US coins, and was therefore chosen to be on the American Gold Buffalo.

The reverse of the Gold Buffalo features an American Buffalo profile. Black Diamond of the Central Park Zoo, the largest American buffalo ever held in captivity at the time, is believed to be the inspiration for this profile. James Earle Fraser had also originally created this design for the Buffalo Nickel. The strength of the American Buffalo is used on the coin to remind us of the pioneering spirit of our expansion into the nation’s west.

If you have any questions, please contact our JM Bullion Customer Service team, we are happy to assist. We can be reached via phone at 800-276-6508, via our live chat, or via our email.