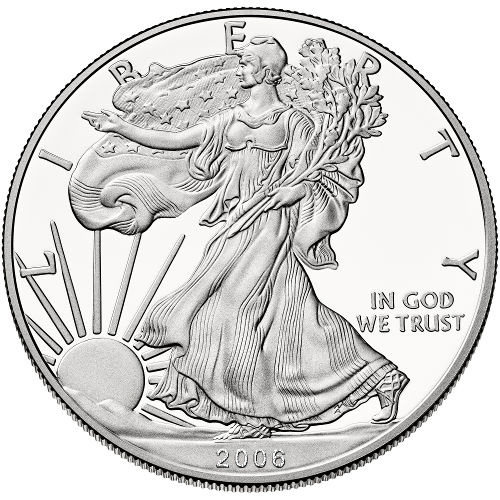 The United States Mint entered 2006 prepared to celebrate the 20th anniversary of its now-beloved American Eagle series. Both the American Silver Eagle and the Gold Eagle were introduced as the official bullion coins of the nation in 1986, and the Mint was ready to honor the coin’s monumental anniversary in 2006. The 2006-W Proof American Silver Eagle Coin is now available from JM Bullion.

These mintage figures were the second largest in program history to date. For the bullion version, it was the second highest behind 1987, and the highest for the Proof American Silver Eagle since its 1986 debut issue. The bump for the proof version remains the largest one-year increase in the program’s 30-year history.

As always, the image of Walking Liberty was featured on the obverse of the coins. John Mercanti’s heraldic eagle remains the centerpiece of the reverse design on the American Silver Eagle.

The United States Mint now had the West Point Mint facility striking three versions of the American Silver Eagle on a regular basis, which requires nearly round-the-clock striking to match demand. The reverse proof available in 2006 was struck at the Philadelphia Mint.

If you have any questions, don’t hesitate to ask. A JM Bullion associate is available at 800-276-6508, online using our live web chat, and via email.