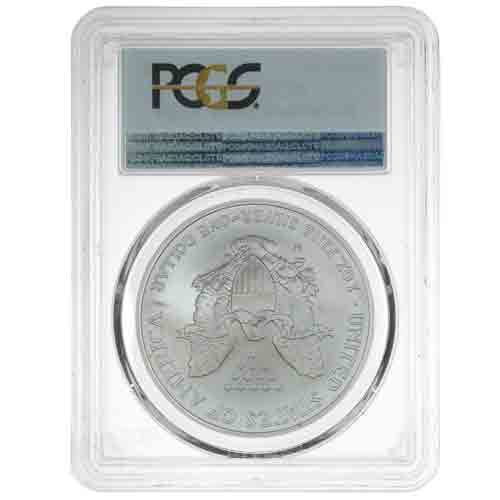 American Silver Eagle coins were originally introduced in 1986, and the United States Mint revealed a brand-new version of the coin in 2006 to commemorate 20 years of the American Eagle program.

First available only in proof and bullion, the new burnished verion offered even greater physical appearances and finish than the proof. Each burnished coin is polished and hand-loaded into the coining presses at the West Point Mint. Once struck, the coins are removed by gloved hands, and individually sealed.

Each of these 2006-W Burnished American Silver Eagle coins has a Specimen Proof 70 grade from the PCGS. Considered a perfect coin with its full, original mint luster and no detracting flaws, the Specimen Proof (SP) certification is rarely used and refers to proof quality coins with stunning finishes.

On the obverse of these American Silver Eagle coins youll find Walking Liberty, originally created in 1916 by Adolph A. Weinman. This design first appeared on the Walking Liberty Half Dollar from 1916 to 1947. The reverse features John Mercantis heraldic eagle design. Mercanti was the Chief Engraver of the United States Mint from 1986 to 2010.

The United States Mint strikes all three versions of the American Silver Eagle, including these burnished coins, at the West Point Mint facility. Burnished American Silver Eagle coins are available annually, but with a much lower mintage than either the bullion or proof version.

If you have any questions, we encourage you to reach out to JM Bullion. Our associates are available on the phone at 800-276-6508, online using our websites hosted live chat, or by sending us your questions via email address.