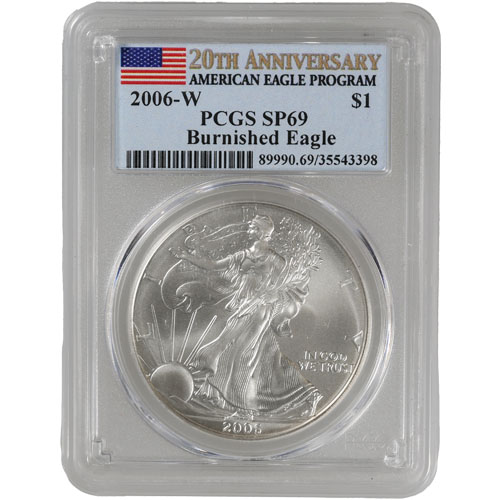 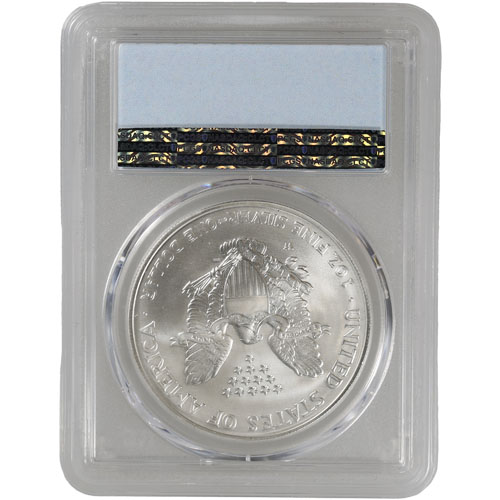 Add an anniversary item to your collection with an American Eagle silver coin from the 2006 minting. This coin bears the West Point Mint mark and comes in a US Mint display box. The 2006-W 1 oz Burnished American Silver Eagle coin is a highly collectible piece issued 20 years after the first silver bullion $1 coins were minted.

Each 2006-W 1 oz Burnished American Silver Eagle Coin in this listing is a near-perfect coin. Specimen Proof 69 coins exhibit full, original mint luster and have a maximum of two minor flaws. Examples of acceptable flaws include only minuscule contact marks or hairlines. These must be located outside the primary focal points of the coin.

The obverse design of the 2006 burnished American Eagle coin is taken from a design by Adolph A. Weinman. The design, called Walking Liberty, first appeared in the early part of the 20th century on US 50-cent pieces. Walking Liberty depicts Lady Liberty moving briskly, her clothing blowing in the breeze. She’s holding an olive branch and the sun is rising in the background,

The reverse side of the coin features the US heraldic eagle. The bold bird is holding arrows and an olive branch, depicting might and mercy, and its wings are spread ready for flight. A ribbon seems to unfurl from its mouth and the words E Pluribus Unum are engraved on the waves of the cloth. Above the eagle, 13 stars are arranged to represent the 13 original colonies, and in front of the eagle, a shield rests.

The 2006-W American Eagle silver coin for collectors is burnished. This means it was struck on unique blanks that are run through a tumbler to provide burnishing. The final result is a coin that appears matte with a bright finish, enhancing all of the visual details.

The uncirculated American Eagles were first minted in 2006, which was the 20th anniversary of the original 1986 silver eagle bullion. The burnishes coins were minted from 2006 through 2008. In 2009 and 2010, mintage was halted for economic reasons, and minting began again in 2011.

Secure your 2006-W 1 oz burnished American Eagle silver coin to get a coin from the first every minting. Contact us at 800-276-6508 for more information or if you have any questions. You can also chat with a rep via the website chat option, which you’ll find in the lower right corner.