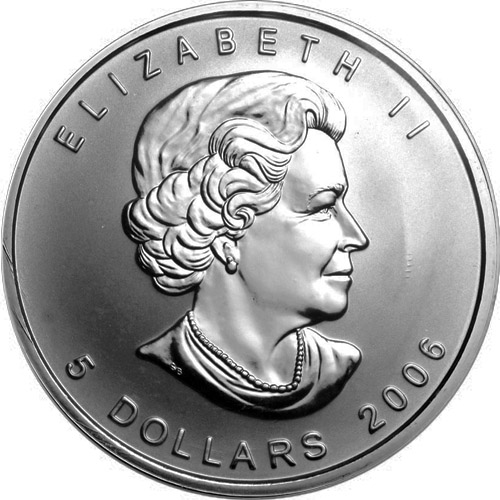 In recent years, silver prices had been edging slowly upward on average with each passing year, though spikes throughout each of those years suggested something more might occur. In 2006, that sometime more arrived when the price of silver per ounce surged significantly to an average of $11.54 per ounce throughout the year. That was nearly $3 per ounce more on average than 2005.

On the obverse of the 2006 1 oz Canadian Silver Maple Leaf Coin is the effigy of Queen Elizabeth II. Her Majesty is captured here in a right-profile portrait created in 2003 by Susanna Blunt, just the second time a Canadian artist had completed the effigy of a monarch for use on Canadian coinage.

The reverse of all Canadian Silver Maple Leaf coins features the sugar maple leaf. First chosen in 1834 by a French Canadian cultural association as its emblem, the first mayor of Montreal later proclaimed the maple leaf as a symbol of the Canadian people. In this design, the maple leaf is surrounded by engravings of the coins nation of issue, purity, weight, and metal content.

The Royal Canadian Mint was founded in 1908 to refine gold and silver mined locally from the Yukon Territories, and to provide the increasingly independent Canada with its own coinage potential. Today, it operates a mint location in Ottawa and Winnipeg.

If you have any questions, dont hesitate to ask. JM Bullion customer service is available at 800-276-6508, online via our live chat, and through our email address.