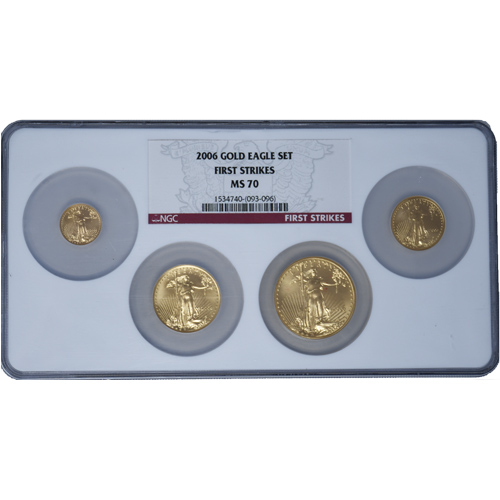 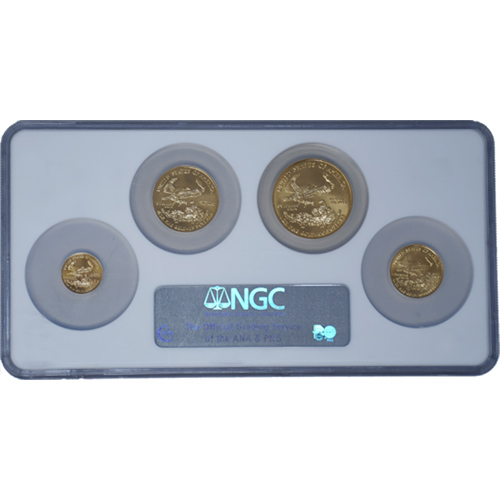 2006 marked the 20th Anniversary of the American Gold Eagle series. For the 2006-coin set, all four official weight denominations from the U.S. Mint Gold Bullion are included and feature the image of Lady Liberty. This coin series is immensely popular among coin collectors everywhere. Today, you can purchase the 2006 American Gold Eagle 4-Coin Set NGC MS70 FS online from JM Bullion.

With the 20th Anniversary release of the American Gold Eagle coin, the fractional-weight coins suffered due to focus on commemorative sets in 2006. The 1 oz coin soared higher than the others, as the three fractional weights experienced a drop in mintage and demand. Previous years in the coin series also saw higher demand for the 1 oz coin compared to coins with fractional values.

The obverse of the 2006 American Gold Eagle 4-Coin Set NGC MS70 FS coins show the image of Lady Liberty walking forward toward the viewer. In one hand she holds a torch, while the other holds an olive branch. A circle of stars surrounds the image of her, and sun rays extend in the distance. The obverse also shows the year of the coin and the inscription, LIBERTY.

On the reverse of the 2006 American Gold Eagle 4-Coin Set NGC MS70 FS, a family of bald eagles is seen, designed by Miley Busiek. A female eagle sits in the nest, holding a hatchling, while the male eagle soars overhead. The reverse also shows the weight, purity, and value of the coin, and the inscriptions: IN GOD WE TRUST, UNITED STATES OF AMERICA, and E PLURIBUS UNUM.