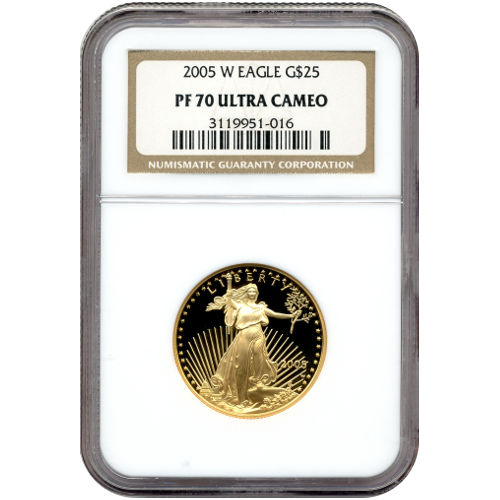 Gold prices continued to rise steadily in the early 2000s, and the United States Mint responded by increasing the offer price on its American Gold Eagle coinage for the initial purchase. In fact, 2005 marked the third consecutive increase following stable pricing for the collectible gold coins from 1998 to 2002.

All of the 2005 1/2 oz Proof American Gold Eagle Coins available for purchase here today come with a PF70 certification from the NGC. Coins in this condition are considered perfect specimens. A PF70 coin has full, original mint luster with no detracting flaws of any kind on the design or surface area.

The included UCAM label stands for ultra-cameo and refers to the visual brilliance of the coin. Youll notice the presence of strong, frosted matte elements on the design sets and a deeply-mirrored, clear background field.

On the obverse of 2005 Proof American Gold Eagle coins is a design of Liberty created in 1907. This was developed by Augustus Saint-Gaudens as part of a massive overhaul of US coinage in the early 20th century. This vision of Liberty broke from traditional designs on American coinage and featured on the $20 Gold Double Eagle until 1933.

The reverse side of the 2005 1/2 oz Proof American Gold Eagle coin includes an exclusive design created for this series in 1986 by Miley Busiek. In this design, youll find a male eagle flying over the nest with a branch in its talons as a female extends her wing to guard a hatchling in the nest.