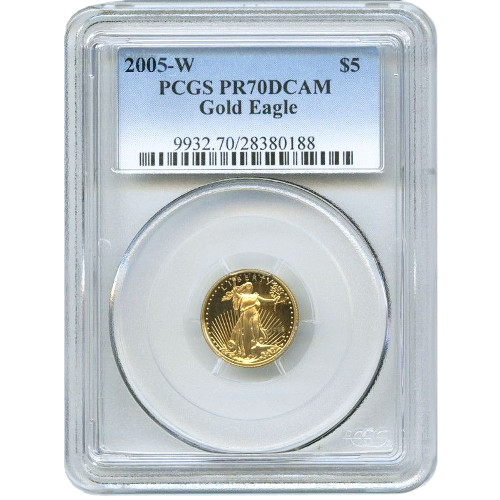 The first coins for the popular series were struck in 1986, and were named the official gold coin of the United States. Unlike its silver counterpart, the American Gold Eagle is minted in four different weights each year: 1 oz, 1/2 oz, 1/4 oz, and 1/10 oz. With the exception of a few years, the coins are struck in bullion, proof, and uncirculated condition, though the latter has only been produced since 2006.

These 2005-W 1/10 oz.American Gold Eagle coins were produced at the West Point Mint, and as such they contain the W mint mark. These coins have also received a PR70 grade from the PCGS which is reserved for coins which it considers to be in perfect conditiont. The DCAM designation on this proof coin means that the design has a deep cameo appearance with a background field that is deeply mirrored and free of any marks.

On the reverse side of the 2005-W 1/10 oz American Gold Eagle is sculptor Miley Busieks depiction of a family of eagles. In her design, a male eagle is featured returning to the nest with an olive branch in its talons. Awaiting his arrival are a female eagle and young hatchlings. The obverse side features Augustus Saint-Gaudens depiction of Lady Liberty, as first used on the $20 Saint-Gaudens gold coin in 1907.

If you have any questions about the 2005-W 1/10 oz American Gold Eagle Coin PCGS PR70 DCAM, don’t hesitate to give us a call at 800-276-6508. Additional support is available via live chat and email. Be sure to view our entire collection of Proof Gold Eagles for more years and sizes.