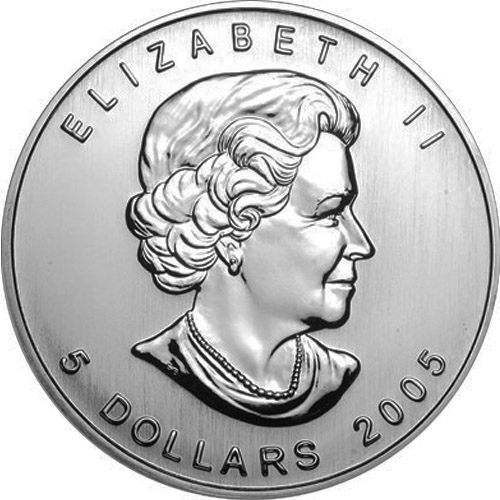 Silver prices continued to rise in 2005, investors looked warily at stock markets, and the Canadian Silver Maple Leaf benefited from the uncertainty. Mintage of the coins continued a slow and steady rise, jumping by more than 150,000 in the biggest increase since the 1998-1999 issues of the coin. Today, 2005 1 oz Canadian Silver Maple Leaf Coins are available to you online from JM Bullion.

Silver prices had a lot to do with the growing demand for the coins. In addition to unstable markets, the price of silver was up on average for the year significantly to $7.32 per ounce. Silver opened at $6.39 per ounce and closed up substantially at $8.83 per ounce. Silver did hit a peak of $9.22 per ounce during the year, before closing just below that figure.

In addition to these 2005 1 oz Canadian Silver Maple Leaf coins from the bullion issue, the Royal Canadian Mint issued three important privy mark coins to commemorate major global milestones celebrating 60th anniversaries in 2005. The Dutch Tulip privy marked the Liberation of Netherlands celebration with a mintage of 3,500 coins. There were two separate 7,000 mintage offerings of Silver Maple Leafs with a Victory in Europe privy and Victory in Japan privy.

On the reverse of the Canadian Silver Maple Leaf coin is the 1979 design of the sugar maple leaf from Walter Ott. The maple leaf has been an emblem of Canada since Lower Canada was a province under French rule in the 1700s. Today it is the national emblem of the independent nation and features front-and-center on the national flag.

The obverse of the 2005 1 oz Canadian Silver Maple Leaf bears the effigy of Queen Elizabeth II. Her Majestys portrait is found in right-profile relief without a crown on her head, the first monarch since her father George VI to appear on Canadian coinage as such.

Please dont hesitate to reach out to JM Bullion with questions. You can contact us on the phone at 800-276-6508, chat with us live online, or simply send us an email.