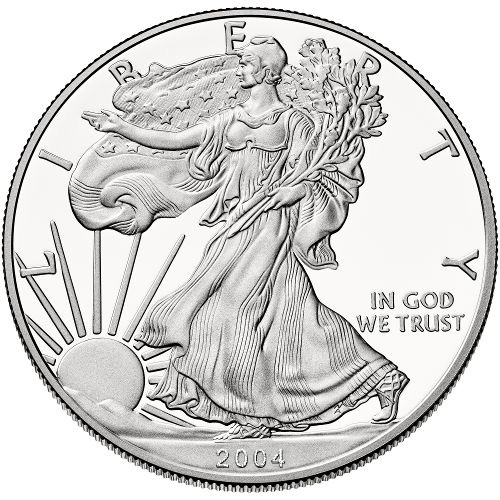 As the American Silver Eagle coin program approached its 20th anniversary in 1986, momentum for the bullion and proof coins was seemingly unstoppable. The annual mintage levels were at their highest averages in program history, and the coins were becoming a favorite of investors at home and abroad. The 2004-W Proof American Silver Eagle coin is now available for purchase through JM Bullion.

By 2004, the American Silver Eagle’s bullion and proof coins were produced in record average numbers. From 2000 to 2005, the United States Mint produced an annual average of 9.6 million coins, significantly higher than the roughly 6.3 million coins produced in the 1980s and early 1990s, and almost double the annual averages of the mid-1990s.

Although production was up only slightly overall from 2003, these 2004 American Silver Eagle production represents one of the few times in the program’s history that both the bullion and proof versions of the coin saw mintage levels increase Year-over-Year.

On the obverse of all American Silver Eagle coins you’ll find the image of Walking Liberty. Holding wheat and olive branches in her left hand, and wearing the American flag over her shoulders, Liberty is featured walking toward the setting sun as a sign of the nation’s march toward a brighter tomorrow.

The reverse features the modern image of the heraldic eagle, which was first used on American coins starting in 1794. Adolph A. Weinman created Walking Liberty in 1916, while then-Chief Engraver of the US Mint, John Mercanti, designed the reverse.

Please contact JM Bullion with any questions about these coins. We’re available at 800-276-6508, online using our live chat, or by submitting questions in writing to our email address.