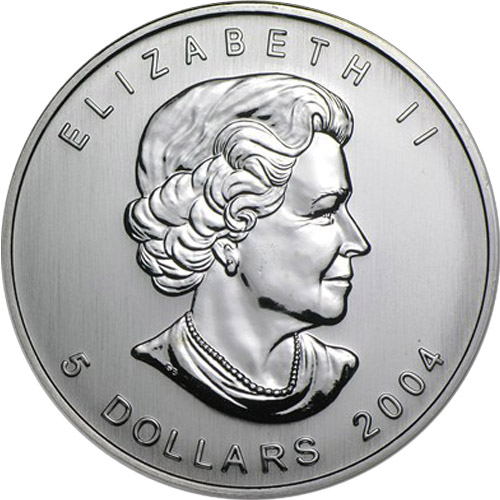 In 2004, stock markets were strong, but worrying signs were starting to emerge with investors. At the same time, the price of silver was rising and those same investors began to look back to save haven metals as a way to protect against whatever downturn might be to come. The 2004 1 oz Canadian Silver Maple Leaf Coin enjoyed steady demand in the early 2000s, and now the 2004 coin is currently available to purchase online from JM Bullion.

The 2004 release of Canadian Silver Maple Leaf bullion coins was met with the same enthusiasm and increased demand of 2003. The coins had a minuscule drop in mintage of less than 4,000 coins from the year before as investors continued to buy silver with prices starting to rise.

Silver prices in 2004 were up on average for the third straight year, this time jumping significantly from the past year to an annual average of $6.67 per ounce throughout 2004. At two different points during the year the price of silver spiked above $8.00 per ounce.

The Royal Canadian Mint not only issued the standard 2004 1 oz Canadian Silver Maple Leaf, but it also issued two commemorative privy mark coins. There was an issue of Silver Maple Leafs to commemorate the 60th anniversary of the Allied invasion of France on D-Day during World War II, with a special privy mark and 11,698 coins struck.

Additionally, there was a run of 15,000 coins issued with a privy mark honoring Alphonse Desjardins. Mr. Desjardins was the 22nd Mayor of Montreal and later a Canadian cabinet minister as Minister of Militia and Defence.

The obverse of these 2004 1 oz Canadian Silver Maple Leaf coins bears the effigy of Queen Elizabeth II. Her Majesty features on the obverse of all Canadian coins and is depicted here in the fourth-generation portrait created by Susanna Blunt in 2003.

On the reverse of the Canadian Silver Maple Leaf coin youll find the iconic sugar maple leaf. This official emblem of Canada, the maple leaf on these coins was designed by Walter Ott and debuted in 1979 on the Gold Maple Leaf coins.

We encourage JM Bullion customers to reach out to us on the phone with questions at 800-276-6508. You can also connect with our customer service team online through our live chat and email features.