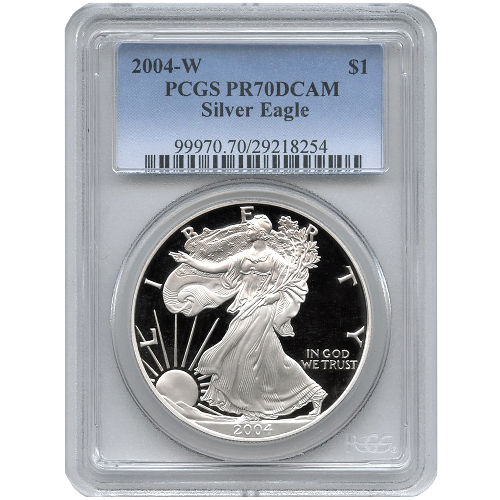 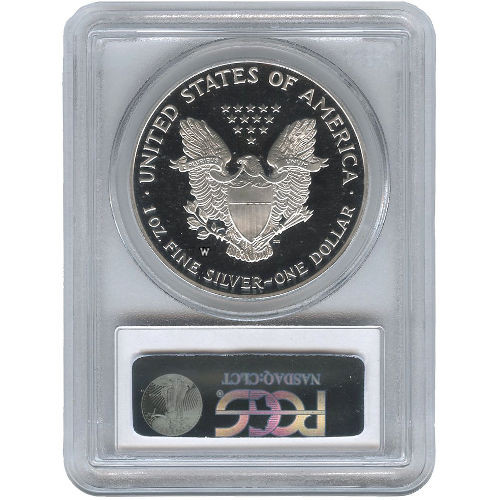 American Silver Eagle coins bear one of the most popular historic images from American currency on the obverse. Walking Liberty, designed by Adolph A. Weinman in 1916, has been refined for use on the American Silver Eagle coin program. Weinmans original creation featured on the Walking Liberty Half Dollar from 1916 to 1947, and features Lady Liberty walking toward the setting sun with an American flag draped around her shoulders.

Each of these Proof American Silver Eagle coins has a perfect PR70 grade from the PCGS. Coins with a PR70 grade have their full, original mint luster and no detracting flaws of any kind on the surfaces.

Deep-cameo is a term used to describe the finish of proof coins. In this case, there is a stark contrast between the design sets and the background field, with the former finished in a strong, frosted matte while the latter has a deeply-mirrored, clear finish.

On the obverse is the image of Walking Liberty. Weinmans creation was part of a greater push from the federal government in the early 20th century to redesign all American currency. The reverse face of the coin has the heraldic eagle, updated and recreated by US Mint Chief Engraver John Mercanti.

American Silver Eagle coins were originally produced at the San Francisco Mint, with production shifting to the Philadelphia Mint from 1993 to 2000, and then to the West Point Mint where they are still produced today.

If you have questions, please feel free to reach out to JM Bullion. You can reach us on the phone at 800-276-6508, online using our live chat, or via email.