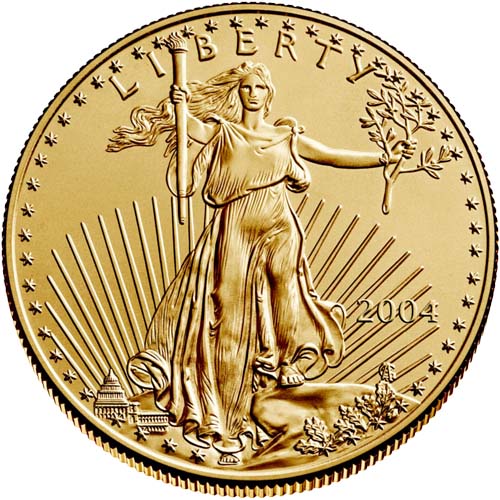 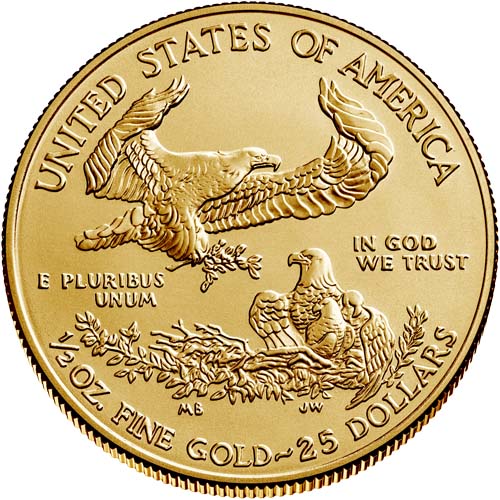 No longer having fears of what havoc might be wrecked on the world by Y2K, the annual minting of American Gold Eagle coins – of all denominations – experienced a drastic drop in production following 1999’s historic numbers. However, 2002 through 2004 saw the US Mint increase their production numbers in small amounts each year, leading to a temporary peak in 2004. This year saw 98,040 1/2 oz Gold Eagles minted, the highest number since 1999. Right now, JM Bullion has the 2004 1/2 oz American Gold Eagle Coin available for purchase.

President Theodore Roosevelt felt that the US coinage had become artistically unsightly, and in 1904, he inquired about the possibility of someone such as Augustus Saint-Gaudens being retained to provide our coinage with some beauty again. Saint-Gaudens accepted the invitation and created designs that appeared on the Eagle ($10) and the Double Eagle ($20) gold coins. It is a version of Augustus Saint-Gaudens’ Liberty that now appears on the American Eagle Gold coin.

The obverse of the 2004 American Gold Eagle coin features that version of Saint-Gaudens’ Lady Liberty. The design depicts a full-length figure of Lady Liberty walking directly at you. Her hair is flowing behind her, she has a torch in her extended right hand and an olive branch in her left hand.

The reverse of the 2004 American Gold Eagle coin features a male eagle, carrying an olive branch, flying above a nest with a female eagle and a couple of eaglets. This design was created by Miley Busiek and sculpted by Sherl J. Winter. It includes several inscriptions as well.

This combination of classic and modern design has proven to be a winner through the years, even though it has been a change from more traditional designs.

Do you have any questions about the Gold Eagle coins? The JM Bullion Customer Service team has the answers. We can be reached via phone at 800-276-6508, via our live chat, or via our email address.