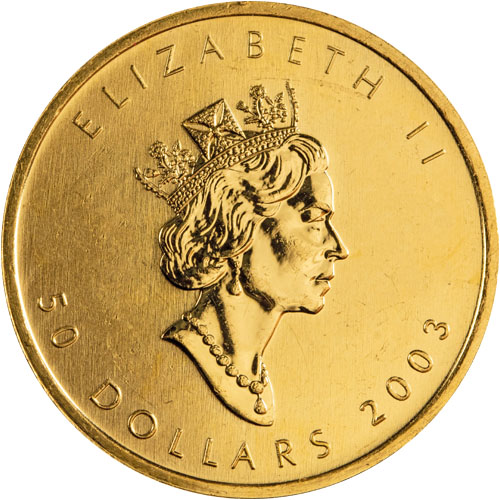 The Canadian Gold Maple Leaf Coin has been available from the Royal Canadian Mint since 1979. Over the course of time, various date marks in the series have earned a reputation through either record high or low mintages. In the case of the 2003 release, it is notable for being one of the few design changes in the program’s history. Now, 2003 1 oz Canadian Gold Maple Leaf Coins are available to you for purchase online at JM Bullion.

In 2003, the Canadian Gold Maple Leaf coin entered a new era with a new effigy of Queen Elizabeth II. To date, three portraits of the Queen have featured on the obverse side of Gold Maple Leaf Coins. The first design was one that had been created by Arnold Machin at the Royal Mint and widely used on British coins.

On the obverse of 2003 1 oz Gold Maple Leaf Coins, you’ll find Dora de Pedery-Hunt’s third-generation portrait of the Queen. This is the last date mark in the Gold Maple Leaf Series to feature this portrait as the 2004 coin would debut the new design from Susanna Blunt.

These 2003 1 oz Canadian Gold Maple Leaf Coins are available to you for purchase in protective flips. The coins come with a mintage of 194,631 1 oz gold coins, one of the lowest in the series. The 2003 release came just two years after the lowest recorded mintage in the series in 2001.