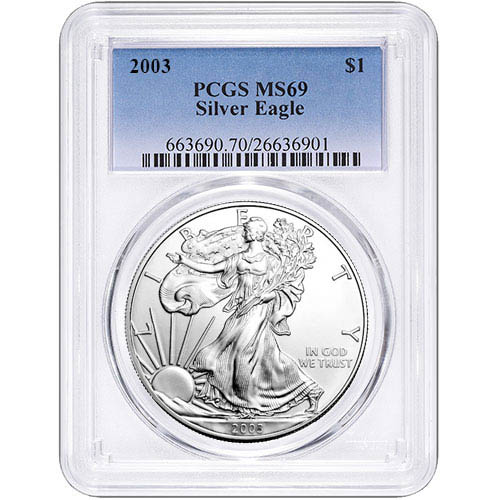 The 1 oz silver coins of the American Eagle collection have proven to be the worlds best-selling coins. During the 21st century, the American Silver Eagles have set countless sales records and sold an astonishing number of coins, in some years selling more than it did in its first several years combined. Today, 2003 1 oz American Silver Eagle Coins are available to you online from JM Bullion in near-perfect condition.

From 2003 to 2005, the American Silver Eagle showed remarkably steady demand. The mintage figure of 8,495,008 coins was a decrease of more than 2 million coins from the 2002 release but was part of a broader period of level demand. In fact, the next two issue years would only bring a total increase of just under 500,000 coins in growth before the program really began to soar in the late 2000s.

All of the 2003 1 oz American Silver Eagles available to you for purchase here today come with a PCGS certification. Coins in Mint State 69 condition feature full, original mint luster with no more than two minor detracting flaws. The only flaws deemed acceptable at this level are minuscule hairlines or contact marks and they must be located outside the primary focal points on the coin.

On the obverse of 2003 American Silver Eagle coins is the vision of Walking Liberty. This design was created in 1916 by Adolph A. Weinman and is widely regarded as one of the two finest American coin designs of the 20th century. It featured on the half dollar from 1916 to 1947.

The reverse of all Silver Eagles includes the heraldic eagle of the United States. First designed in 1794 by Robert Scot, this official seal of the nation was modernized for use on the American Silver Eagle in 1986 by John Mercanti.

Mintage wasnt the only stable factor in American Silver Eagle sales in the early 2000s. The price of silver, on average each year, held relatively steady as well. This was the fourth year of sub-$5 pricing, with a yearly average of $4.88 throughout 2003, though silver finished the year near $6 per ounce.

Please dont hesitate to reach out to JM Bullion if you have any questions. You can call us on the phone at 800-276-6508, chat with us live online, or email us directly.