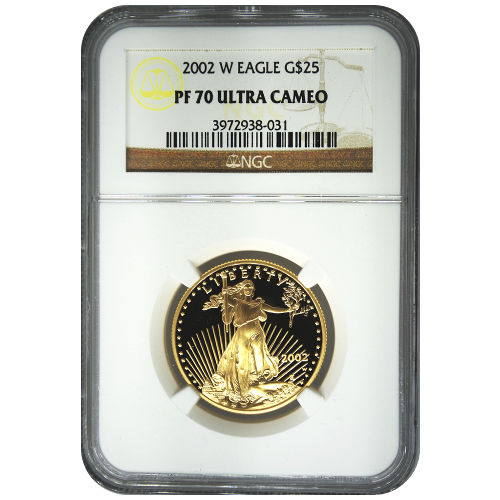 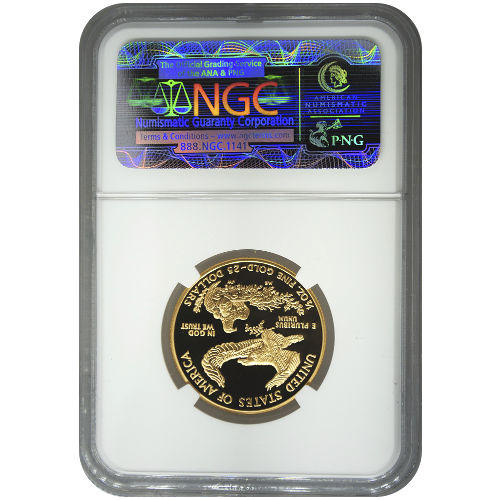 The Proof American Gold Eagle coinage experienced stability in demand in the early 2000s. Following a dip in mintage to start the decade in 2001, the four coins in the series rebounded in 2002 to find a stable level which would persist through 2006. The 2002 1/2 oz Proof American Gold Eagle Coin is currently available to you for purchase online from JM Bullion with an NGC certification.

In 1995, the Proof American Gold Eagle coinage began a decline in mintage that lasted for four years as interest in the collectible gold coins waned. After a brief rebound in 1999 and 2000, the Proof Gold Eagles sank below the 1998 low point which had previously represented a series low for most of the weights.

On the obverse of the Proof American Gold Eagle is Augustus Saint-Gaudens iconic design of Lady Liberty. Created in 1907, this vision of Liberty was used on the $20 Gold Double Eagle from 1907 to 1933.

The reverse of the 2002 1/2 oz Proof American Gold Eagle coin features the design of American bald eagles. Visible on the reverse is a male in flight over the nest, while inside the nest a female guards over some hatchlings with one under her wing for protection.

These 2002 1/2 oz Proof American Gold Eagles earned perfect certification from the NGC. A PF70 coin is defined by its full, original mint luster and complete lack of detracting flaws. The UCAM label is reserved for proof coins with strong, frosted designs and deeply-mirrored background fields.

We encourage JM Bullion customers to contact us at 800-276-6508 with questions about gold for sale. You can also connect with us online using our live chat and email address.