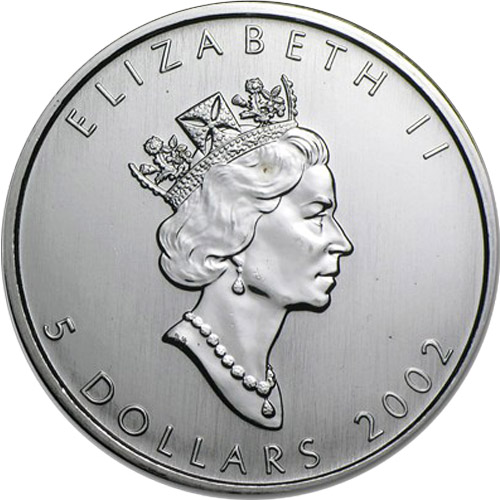 After watching demand for the Canadian Silver Maple Leaf fall for two straight years, the 2002 issue of the coins by the Royal Canadian Mint was met by increased demand that was a strong sign of good things to come. The 2002 issue was the first in a string of ten consecutive issues that would experience higher demand. Right now, 2002 1 oz Canadian Silver Maple Leaf Coins are available to purchase online from JM Bullion.

The 2002 issue of the Canadian Silver Maple Leaf coin was significant for a number of reasons. First and foremost, the increase in demand and mintage was an indicator of increasing interest in silver. Following this issue, Silver Maple Leaf mintage would remain strong and climb each year through 2011.

Silver prices were showing signs of life after sinking in 2001. The overall price of silver per ounce was up slightly from 2001, settling in at an average of $4.60 per ounce throughout 2002. It also traded within a tight range all year, hitting a low of just $4.40 per ounce and a high of only $5.10.

Another significant event for the Canadian Silver Maple Leaf came in 2002 as the third-generation portrait from Dora de Pedery-Hunt was to be phased out in the years to come. This is the last official year that Pedery-Hunts portrait of Queen Elizabeth II was to appear on most Canadian coinage.

The obverse of the 2002 1 oz Canadian Silver Maple Leaf Coin includes that third-generation portrait from Pedery-Hunt. She was the first Canadian to ever design the Queens effigy for coinage, and she captured Her Majesty in a very regal pose that was unlike anything seen before or since.

On the reverse of the Canadian Silver Maple Leaf coins youll notice the sugar maple leaf. The sugar maple leaf is the official emblem of Canada, and has been used on various levels to represent the region since the 1700s.

All Canadian Maple Leaf Coins are produced by the Royal Canadian Mint. With a facility in the federal capital of Ottawa and another in Winnipeg, the RCM is the official sovereign mint of the nation and tasked with the production of circulation coinage as well as commemorative bullion.

If you have any questions, dont hesitate to reach out to JM Bullion. You can contact us on the phone at 800-276-6508, chat with us live online, or email us directly.