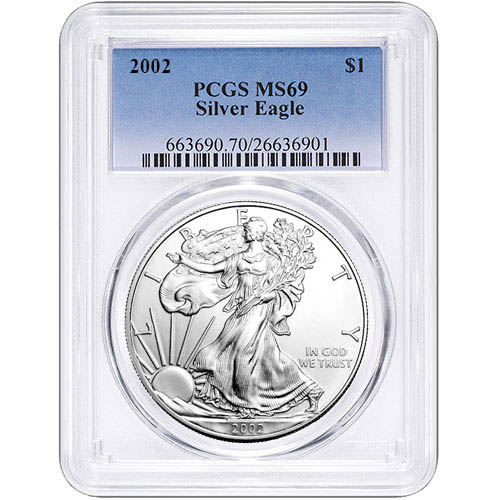 The 2002 American Silver Eagle coin was just the second issue in the series’ history to cross the 10-million coin mark and set a new second-highest mintage figure, still trailing the 1987 coin’s 11.44 million mintage. The 2002 coin’s mintage represented a jump of 1.5 million coins, the biggest since the 1999-2000 mintage jump. Right now, 2002 1 oz American Silver Eagle Coins are available to purchase online from JM Bullion in near-perfect condition.

Each 2002 1 oz American Silver Eagle Coin in this JM Bullion product listing comes with a Mint State 69 certification. Coins in this condition exhibit full, original mint luster and present with no more than two minor detracting flaws. Those flaws are limited in nature to minuscule contact marks or hairlines and limited in scope to the areas outside the primary focal points.

The 2002 American Silver Eagle coin had a final mintage figure of 10,539,026 coins. This was the highest behind only the 1987 coin release but marked a temporary peak as the series retreated back below 9 million coins for the next three years. The 2002 release was, nonetheless, part of a 10-year stretch of strong demand for the coins after lackluster demand throughout the late 1980s and early-to-mid 1990s.

On the obverse of 2002 1 oz American Silver Eagle coins is Walking Liberty. This iconic image depicts Liberty walking toward the setting sun on the horizon as she wears the American flag over her shoulders and holds the oak and laurel branches in her left hand.

The reverse side of 2002 American Silver Eagles features the design of the heraldic eagle of the United States. This version of the seal from John Mercanti depicts the bald eagle behind the national shield as it clutches arrows in one talon and an olive branch in the other. There is a triangular cluster of 13 stars located above its head.

If you have any questions, don’t hesitate to ask. JM Bullion customer service is available to you at 800-276-6508, online using our live chat, and via our email address.