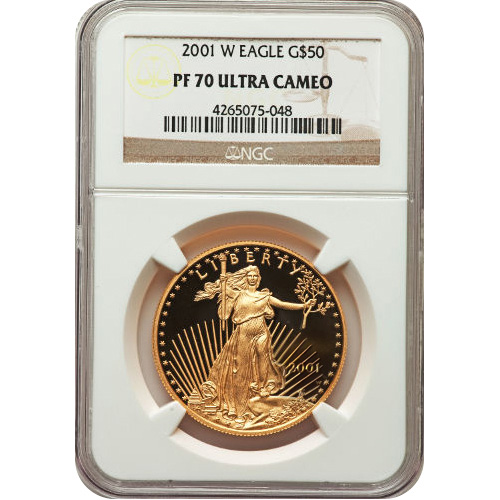 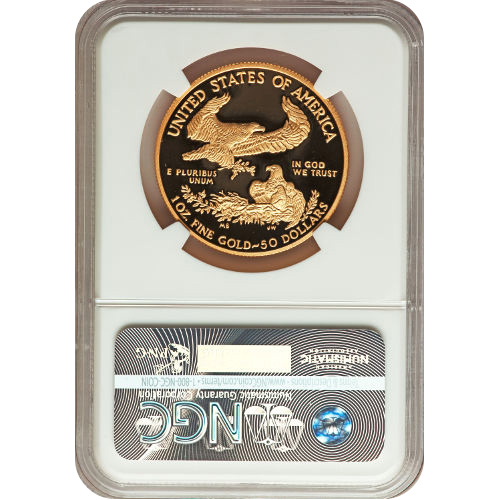 Each of the 2001 1 oz Proof American Gold Eagle Coins in this product listing comes with a perfect certification from the NGC. The NGC issues a PF70 grade to proof coins which exhibit full, original mint luster with a complete lack of detracting flaws. The UCAM label included with purchase denotes the presence of strong, frosted design reliefs and deeply-mirrored, clear background fields.

After seeing mintage rise for the Proof Gold Eagles in 1999 and 2000, the United States Mint saw a sharp decline in the demand for its collectible Gold Eagles in 2001. The 1 oz gold coin did drop along with the other weights in the series, but its loss of 8,452 coins year-over-year was the lowest among the four weights and much lower than the staggering decline of more than 12,400 in the mintage of the popular 1/10 oz coin.

On the obverse of the 2001 1 oz Proof American Gold Eagle Coin is the image of Lady Liberty. This design of Liberty is a powerful statement on America’s growing prominence in the early 20th century. Augustus Saint-Gaudens envisions a figure of Liberty breaking free from the nation’s previous use of Greek and Roman inspirations, with a character that exudes freedom and confidence.

If you have any questions about these coins, please contact JM Bullion. Our customer service associates are waiting to help you at 800-276-6508, online using our live chat, or via our email address.