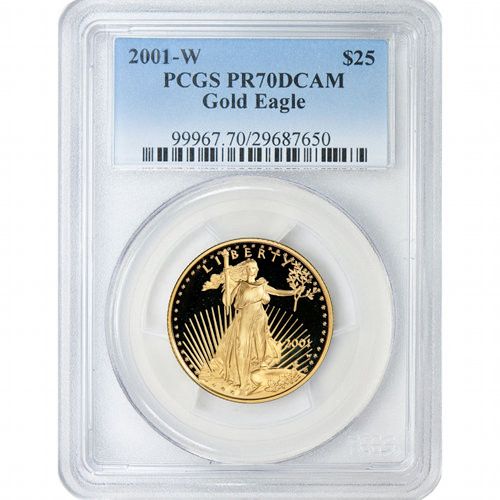 In 1986 the United States Mint introduced the American Eagle bullion and proof coin program as the nations official gold and silver coins. The year 2001 marked the 15th anniversary of the program, and as always the Mint delivered with high quality gold and silver coins for investors and collectors around the world. The 2001 American Gold Eagle proof coin is currently available from JM Bullion in perfect condition.

The year 2001 was special in the American Eagle series for a number of reasons. Many of the silver and gold versions of the coin celebrated 15 years since the program was launched in 1986. While the oz American Gold Eagle is part of that program, it was introduced a year later in 1987, making this the 14th anniversary for that particular weight.

Each 2001 American Gold Eagle in this product listing from JM Bullion has been graded PR70 by the PCGS. As a perfect proof specimen, these coins have full, original luster from the mint and feature no detracting flaws of any kind.

The deep-cameo designation is reserved for proof products with an exception finish and brilliant appearance. The design sets of the coin are strong and frosted, while the background field is deeply-mirrored and clear.

On the obverse of all American Gold Eagle coins is the image of Lady Liberty as she guides the nation forward from the national capital of Washington DC. This depiction of Liberty came from Augustus Saint-Gaudens in 1907, and is the first to feature Liberty in a modern, American design concept on US currency.

The reverse features the image of a male bald eagle as it returns to the family nest. Inside the nest is a group of hatchlings being carefully watched over by a female eagle. Miley Busiek created this design in 1986, and it is used exclusively on the American Gold Eagle.

If you would like to learn more about this 2001-W 1/2 oz American Gold Eagle PCGS PR70 DCAM or any of our other products, please call us at 800-276-6508. You can also contact us by using the live chat feature or by filling out our online form. You may also want to take a look at our full inventory of Proof Gold Eagles as well.