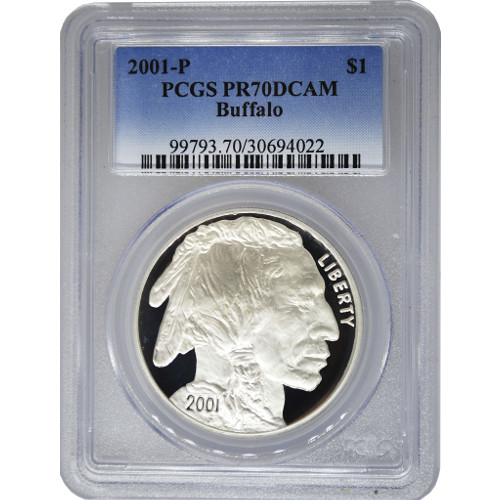 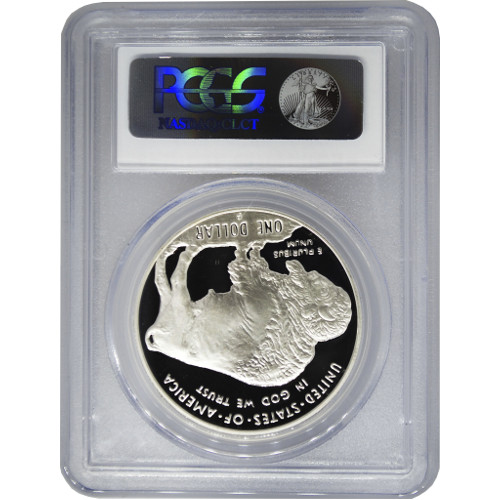 James Earle Frasers famous Buffalo Nickel design from 1913 has been recreated many times on the obverse and reverse face of American coinage, and even on the sides of silver rounds. One of the greatest reproductions was the United States Mints 2001 Buffalo Silver Dollar commemorative coins. Right now, the 2001-P Buffalo Silver Dollar Coin is available from JM Bullion.

In this product listing, you have the chance to purchase a 2001-P Buffalo Silver Dollar Coin in perfect condition according to the PCGS. Coins with a PR70 grade are considered perfect proofs with full, original mint luster and no detracting flaws of any kind. The DCAM designation stands for deep-cameo, and indicates the presence of a strong, frosted relief over a deeply-mirrored, clear background field.

2001 Buffalo Silver Dollar coins, and the Fraser design, were so popular that the United States Mint used the Buffalo Nickel design again in 2006 to launch the American Gold Buffalo series of bullion and proof coins, the first-ever 24-karat gold coin from the US Mint which remains in production today.

On the obverse of the 2001-P Buffalo Silver Dollar is the composite image of three Native American chieftains who sat for Fraser in sessions during the early 1900s. It is believed the three chiefs involved were Chief Iron Tail, Chief Big Tree, and Chief Two Moons.

The reverse of all Buffalo Silver Dollar coins includes the image of a buffalo by the name of Black Diamond. The inspiration for Frasers design, Black Diamond was a resident of the Central Park Zoo in New York City early in the 20th century.

All 2001 Buffalo Silver Dollar Coins in this product listing come from the United States Mints Philadelphia Mint facility, as indicated by the presence of a P mint mark on the coins reverse side below the face-value engraving of One Dollar.