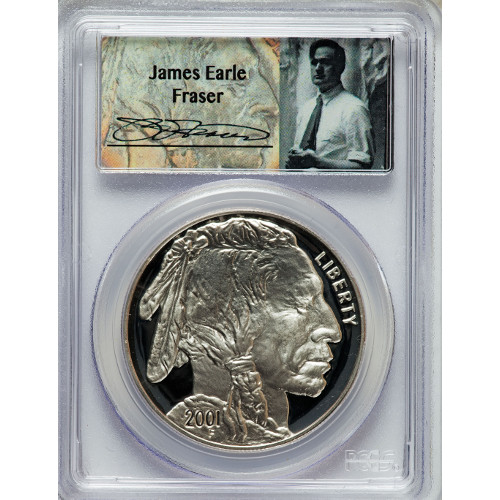 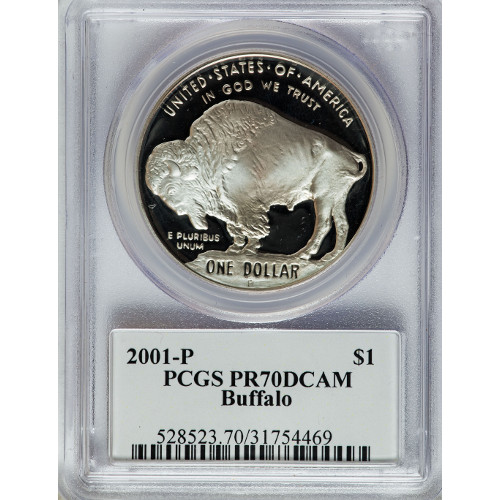 The United States Mint restarted its commemorative coin programs in 1982 following a long hiatus in the production of commemorative silver dollars. The Buffalo Silver Dollar was one of the first coins struck during the 21st century and features designs that first appeared on American coins in 1913. Each coin has a face value of $1 and was struck using .900 fine silver. Today, you can purchase a brilliant 2001 Buffalo Silver Dollar from JM Bullion with a PR70 grade from the Professional Coin Grading Service.

Each of the coins available in this listing today are considered perfectly struck proof coins by the PCGS, as indicated by the PR70 grade the coins received. The DCAM, or deep cameo, designation signifies a coin with a strong, frosted finish and a deeply mirrored, clear background field. These proof coins feature a brilliant contrast between the finish on the designs and the deep black coloring of the background field. Each one is individually packaged with a James Earle Fraser label. Fraser was responsible for designing the original Indian Head nickel images used on the Buffalo Silver Dollars.

In 1913, Fraser created depictions of an American Indian chieftain and a buffalo for use on a coin that would come to be known as the Indian Head nickel. He created the right-profile picture of the chieftain by combining the physical features of three different real-life chieftains. His depiction of the buffalo was inspired by Black Diamond, a resident bison at the Central Park Zoo in the early 20th century.

On the reverse side of the coin is Frasers depiction of Black Diamond. The massive beasts image is surrounded by multiple engravings, including United States of America, In God We Trust, E Pluribus Unum, and One Dollar. The P mint mark below the face value identifies the coin as a product of the Philadelphia Mint. The obverse bears the profile image of the chieftain, along with the engravings Liberty, 2001, and F.

The Philadelphia Mint is one of four production facilities in the United States Mint system. Together with the other facilities, it produces circulation and commemorative coins for the federal government.

If you have questions about JM Bullion products, you can reach our associates at 800-276-6508, online using our live chat, or via email.