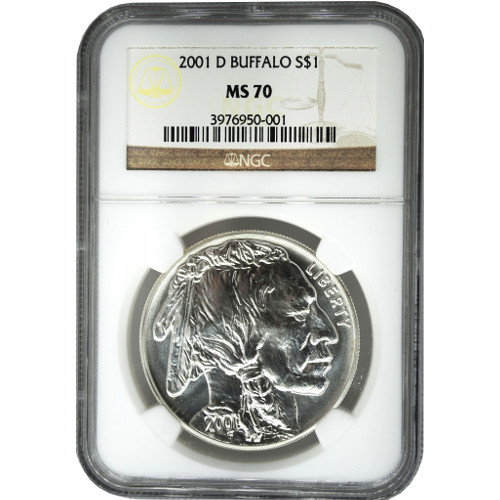 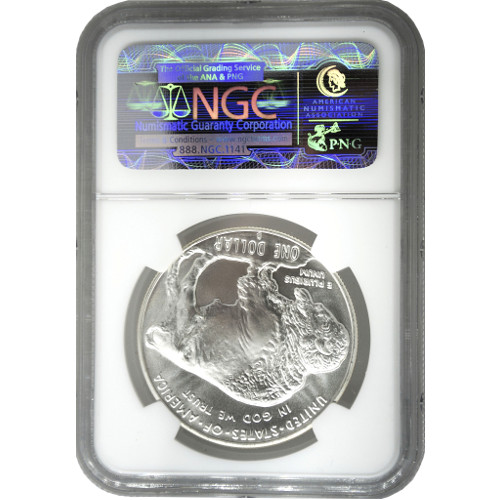 One of the most popular coin designs in United States Mint history came from James Earle Fraser. The images he created for the 1913 Indian Head nickel have been reproduced twice in the modern era; on the Buffalo Silver Dollar and American Gold Buffalo. This 2001 Buffalo Silver Dollar is available from JM Bullion with a Mint State 70 grade from the Numismatic Guaranty Corporation.

When the NGC certifies a coin as Mint State 70, or MS70, it recognizes the coin as a perfectly struck product by the mint. On the surface of this coin you will find no contact marks, blemishes, hairlines, or other flaws. Each Buffalo Silver Dollar available as part of this listing has its full, original luster and an attractive, sharp strike for the mint and date.

Each coin in the series features the motif originally used on Frasers Indian Head nickel from 1913 to 1938. On the obverse side is Frasers depiction of an American Indian chieftain. The right-profile portrait does not represent a specific chieftain, but instead, is the result of Fraser combining the facial features of three chieftains he sat through portrait sessions with in the early 20th century.

On the reverse side of the coin is Black Diamond, a resident buffalo at Central Park Zoo in New York City during the early 1900s. Roughly 197,000 of these 2001-D Buffalo Silver Dollar coins were struck by the Mint using .900 silver.

The United States Mint struck most of its Buffalo Silver Dollar coins at the Denver Mint, as indicated by the D mint mark featured on these products. The Denver Mint is one of four production facilities used by the US Mint.

If you have any questions about Buffalo Silver Dollar coins, a JM Bullion associate will be happy to answer them. You can contact us at 800-276-6508, or connect with us online through live web chat and email.