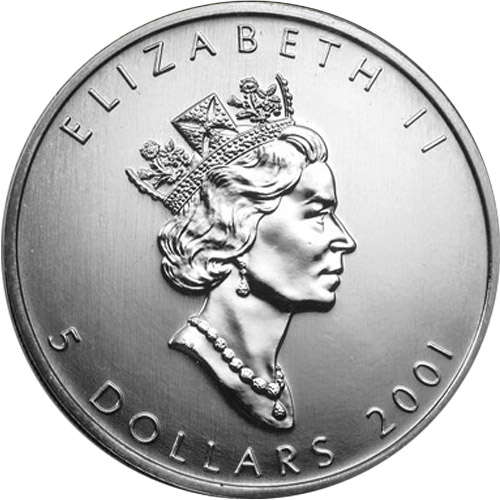 The Canadian Silver Maple Leaf coin is one of the most sought-after and respected bullion coin programs available to modern investors. The coins debuted in 1988 from the Royal Canadian Mint and stand alongside the gold, platinum, and palladium versions of the coin as the official bullion series of Canada. Today, 2001 1 oz Canadian Silver Maple Leaf Coins are available to you online from JM Bullion.

The obverse side of all Canadian coins features the portrait of the ruling monarch of England. Queen Elizabeth II has featured on all Canadian coins since 1953, and her image has been captured by two different artists up to the 2001 1 oz Canadian Silver Maple Leaf coins issue. The first was from Arnold Machin and is the longest-running design to date at 24 years.

On the obverse of these 2001 Canadian Silver Maple Leaf coins is the third-generation portrait of Queen Elizabeth II. Her Majesty is captured here in right-profile relief at the age of 64 by Dora de Pedery-Hunt. This design was used from 1990 to 2002 and holds two distinctions in the collection. It is the first effigy of the Queen by a Canadian artist, and it is also the most regal depiction wherein the Queen wears a more ornate crown with more visible earrings and necklace.

The reverse of the 2001 1 oz Canadian Silver Maple Leaf always features the sugar maple leaf design. Created in 1979 by Walter Ott, this design never changes on the reverse of any coin in the series and is surrounded by engravings of the coins nation of issue, weight, purity, and metal content.

With the fears of Y2K proving unfounded in 2001 and silver prices sinking dramatically from past years to an average of $4.37 per ounce, sales of the 2001 Silver Maple Leaf were down. Mintage dropped from 403,652 the year before to just 398,563 in 2001. This remains the fifth-lowest mintage in program history to date.

Please contact JM Bullion with questions regarding these 1 oz silver coins. You can call us at 888-989-7223, chat with us live online, or email us directly.