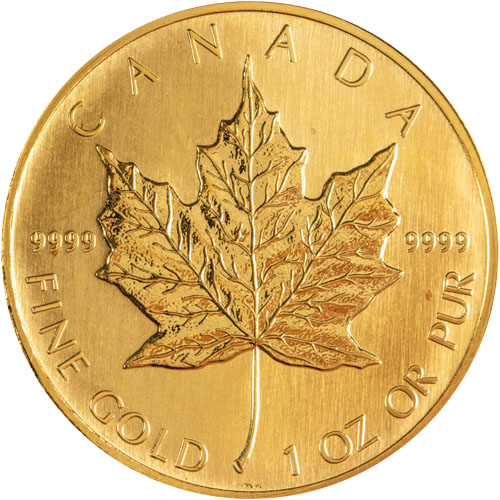 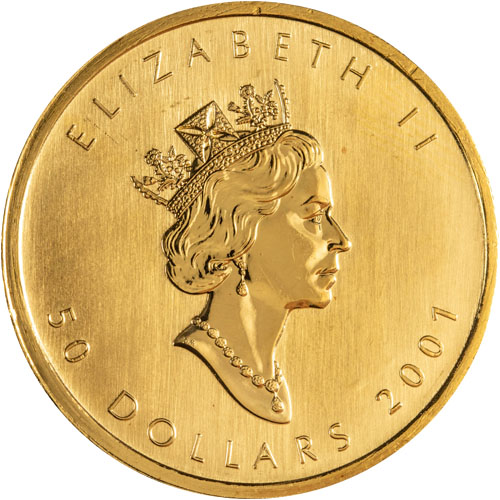 When the Royal Canadian Mint introduced the Canadian Gold Maple Leaf in 1979, the coin program was just the second modern gold bullion coin available to investors. With many nations abandoning the gold standard and gold coins in circulation in the early 20th century, the reintroduction of gold coins as bullion investment pieces was a fresh chance for private individuals to own gold.

With the 1979 debut of the Gold Maple Leaf, the South African Krugerrand, at the time the only option, had a serious contender. Though it was not initially available with .999 pure gold content, in 1982 when the Royal Canadian Mint increased its purity, it became the first-ever 24-karat gold coin.

Queen Elizabeth II is on the obverse side of 2001 Canadian Gold Maple Leaf Coins. Her Majesty is shown here in right-profile relief in the third-generation portrait for Canadian coinage. This design was created in 1990 by Dora de Pedery-Hunt and is the first from a Canadian artist during the Queen’s reign.

A sugar maple leaf features on the reverse side of the 2001 1 oz Gold Maple Leaf. This design was created specifically for this series in 1979 by Walter Ott and has subsequently been used on all of the coins in the Canadian Maple Leaf Series.

These 2001 1 oz Canadian Gold Maple Leaf Coins are available to you for purchase in protective flips. With a mintage of only 138,878 coins in 2001, this date mark is the second lowest in the history of the series.

JM Bullion customer service is available to assist you at 800-276-6508. Our team is also available to you online using our live chat and email address features.