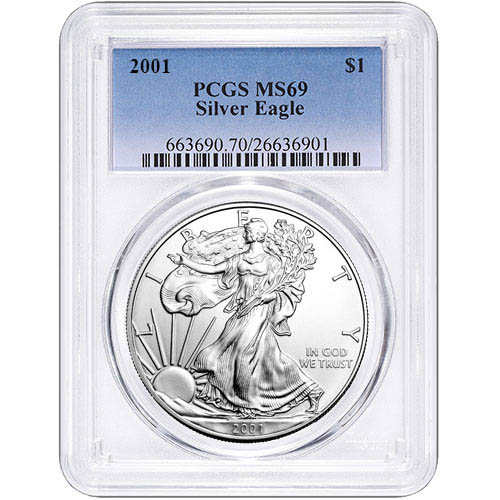 The 21st century saw new average highs in mintage figures for the American Silver Eagle bullion coins. Though the program did not set any new mintage records for the 10 releases from 1997 to 2006, the program did experience significant growth compared to the majority of the 1990s and saw higher average demand. Now, 2001 1 oz American Silver Eagle Coins are available to you for purchase online from JM Bullion with a PCGS certification.

From 1988 to 1996, the Silver Eagles had an average annual mintage of just 5.3 million coins and a high of 6.7 million coins in 1993. From 1997 to 2006, on the other hand, mintage figures doubled on average to 8.19 million per year. Additionally, the coins twice crossed the 10-million mintage line, in 2002 and 2006. The Silver Eagles still hadn’t surpassed the 1987 high, but the future would bring several new, astonishingly high, mintage records.

On the obverse of 2001 American Silver Eagle coins is the image of Walking Liberty. Created in 1916 by Adolph A. Weinman, it depicts Liberty in left-profile relief as she walks toward the setting sun on the horizon with the American flag over her shoulders.

The reverse side of 2001 1 oz American Silver Eagle coins features the image of the heraldic eagle of the United States. This design was modified for the Silver Eagle by John Mercanti in 1986. These 2001 American Silver Eagles were the first to be struck by the West Point Mint, shifting from the Philadelphia Mint after just two production years (1999-2000).

2001 1 oz American Silver Eagle Coins available to you in this listing come with a near-perfect grade from the PCGS. Mint State 69 coins showcase full, original mint luster and no more than two minor detracting flaws. Examples of acceptable flaws at this level include only minuscule contact marks and hairlines.

We encourage JM Bullion customers to call us on the phone at 800-276-6508 with any questions. You can also reach out to us online through our live chat and email address features.