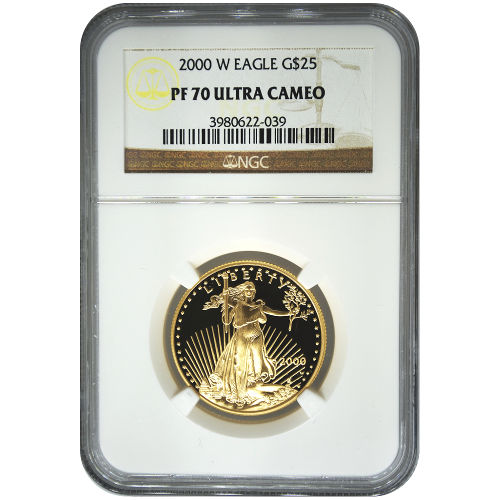 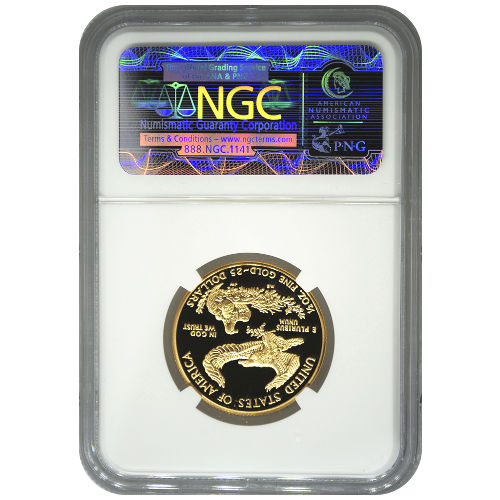 Riding a wave of increasing demand for gold, the Proof American Gold Eagle coins saw mintage figures rise across all four available weights. The 1/2 oz coin, like many others in the 2000 issue, hit a high not seen since 1996 and which would not be seen again until 2005 as the mint approached the 20th anniversary of the program. The 2000 1/2 oz Proof American Gold Eagle Coin is currently available to you for purchase online in perfect condition at JM Bullion.

The Proof American Gold Eagle coins had significant ebbs and flows in demand following the stability of the early 1990s. From 1994 onward, the coins would follow a downward arch in demand that would bottom out for all four weights in 1998 with low mintage figures that remain among the 10-lowest minted date marks in the programs history to this point.

For the 2000 1/2 oz Proof American Gold Eagle, the mintage of 32,028 coins was the highest mark the weight hit since 1996. It was also the highest the mark would reach until the 2005 issue as demand for the coins began to pick up in advance of the 2006 20th anniversary for the Gold Eagles.

On the obverse of 2000 Proof American Gold Eagle Coins is the image of Lady Liberty. This design was created in 1907 to reflect the growing confidence and strength of the United States on the international stage. President Theodore Roosevelt wanted American coinage redesigned to reflect the nations status, and Augustus Saint-Gaudens delivered with this powerful image of Liberty as the nations guiding force.

The reverse of all 2000 1/2 oz Proof American Gold Eagle Coins features a design found only on the Gold Eagle collection. It was created by Miley Busiek and depicts a male eagle in flight over the family nest. A female in the nest shelters a young hatchling with her wing.

We encourage JM Bullion customers to contact us with questions at 800-276-6508. You can also reach out to us online using our live chat and email address features.