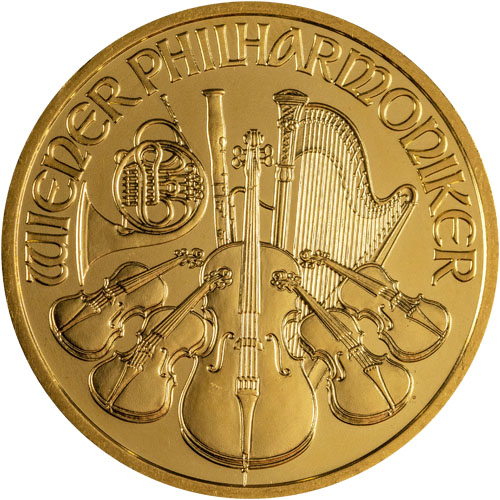 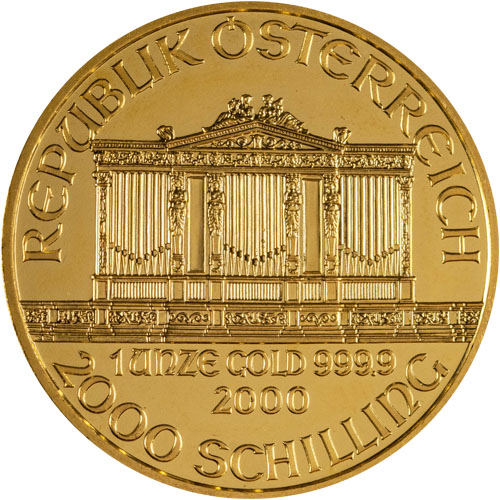 At the turn of the 21st century, the Austrian Philharmonic Coin was experiencing low demand. The 2000 release in the 1 oz gold series presented an increase in demand, but proved to be a sign of false hope as the series would fall to some of its lowest levels ever in the years to come. Now, 2000 1 oz Austrian Gold Philharmonic Coins are available to you for purchase online from JM Bullion.

During the 1990s, demand for the Austrian Gold Philharmonic was relatively flat. There were early spikes in 1992 and 1995, but the series otherwise languished below 400,000 coins each year.

For the obverse design of 2000 1 oz Gold Philharmonic Coins, you will find a depiction of the Great Pipe Organ within the Musikverein. While the building itself is the original from 1870, the current Great Pipe Organ is the second iteration of a pipe organ and was installed in 1907.

In the reverse design of 2000 Austrian Gold Philharmonic Coins, you will find a collection of musical instruments popular with the members of the Vienna Philharmonic Orchestra. This design element includes a Vienna horn, a bassoon, a harp, and four violins all centered on a large cello.

These 2000 1 oz Austrian Gold Philharmonic Coins are available to you inside protective flips. The mintage of 245,700 coins in 2000 was a modest increase from 2009, but well above the next seven date marks to come in the series.

JM Bullion customer service is available to assist you at 800-276-6508 when you buy gold. Additionally, you can chat with us live online or email us directly.