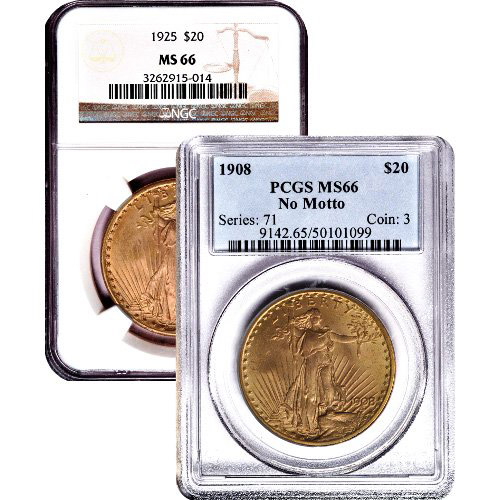 The Double Eagle was a circulation gold coin in the United States issued between 1849 and the end of circulation gold coinage in the United States in 1933. Only two designs were ever used on the obverse and reverse faces of the coin, with the so-called Saint-Gaudens Gold Double Eagle coins representing those struck from 1907 to 1933 and designed by Augustus Saint-Gaudens. Right now, Pre-33 $20 Saint Gaudens Gold Double Eagle Coins are available to purchase from JM Bullion with official certification.

Each of the Pre-33 $20 Saint-Gaudens Gold Double Eagle Coins in this product listing is available to you inside of a protective plastic slab. The coins earned a certification of Mint State 66. Coins in MS66 condition have above-average quality in surface appearance and mint luster. There are no more than three or four minor, noticeable contact marks and a few light hairlines are visible under magnification.

An Act of Congress passed on April 2, 1792, established the United States Mint and regulated the production of US coins. The original act included provisions for gold coins for the nation known as the “eagle,” “half-eagle,” and “quarter-eagle.” On March 3, 1849, another Act of Congress authorized the issuance of a “double eagle” coin.

The Gold Eagle coins had a face value set around the $10 (USD) denomination on the Gold Eagle. Each coin had a denomination based upon size compared to the Gold Eagle, with the half-eagle set at $5 (USD) and the quarter-eagle at $2.50 (USD). The introduction of the Gold Double Eagle, at $20 (USD), coincided with an influx of gold to US Treasury coffers following the California Gold Rush.

On the obverse of Pre-33 $20 Saint-Gaudens Gold Double Eagle coins is the design of Liberty created in 1907 by Augustus Saint-Gaudens. Commissioned directly by President Theodore Roosevelt in 1905 to lead a charge in changing US coinage design.

The reverse of the Pre-33 Saint-Gaudens Gold Double Eagle features the image of an American bald eagle as it flies over the sun. Pre-33 Saint-Gaudens Gold Double Eagle coins can have differentiations in design based upon year of issue. 1907 coins have a high-relief strike with Roman numerals for the date mark and no national motto. Coins from 1908 onward have Arabic numerals for date marks and include the national motto.

If you have any questions, please contact JM Bullion. Our customer service team is available at 800-276-6508, chat with us live online, or email us directly.