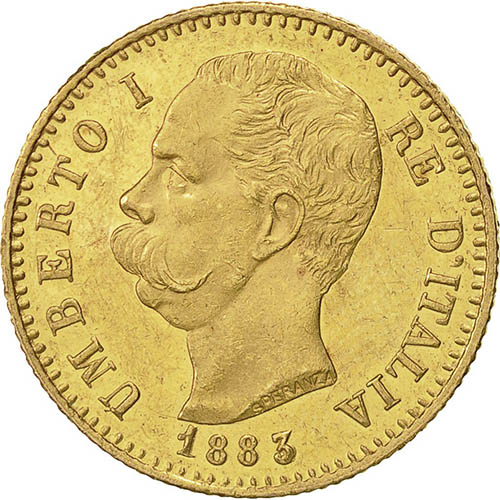 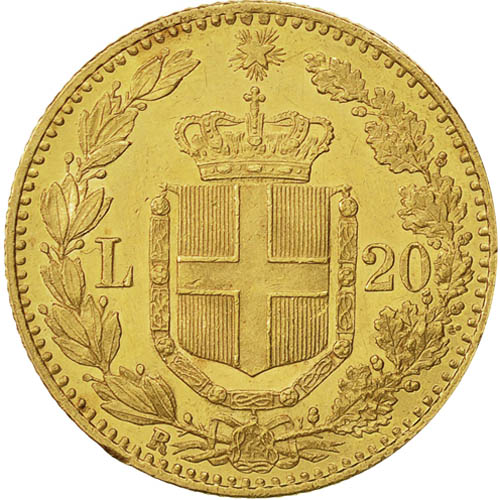 From 1861 until 2002, the Italian lira was the currency of Italy. Introduced in advance of Italy joining the Latin Monetary Union, the lira was a direct continuation of previously issued lira denominations of Italian kingdoms, such as the Sardinian lira, the Lombardy-Venetia pound, Two Sicilies piastra, and the Papal States scudo. The 20 Lire Gold Coin from Italy is currently available to you online from JM Bullion.

The lira was matched against the Francs gold coins issued by France, Switzerland, and Belgium in gold content and purity in the Latin Monetary Union. These 20 Lire Gold Coins from Italy are the same size and weight as the popular French 20 Franc Angel coin design but are harder to find when buying gold online.

Lira gold coins were issued by mints in Florence, Milan, Naples, and Turin in various denominations starting in 1861 with the formation of a unified Kingdom of Italy. The first King of Italy you’ll find on the obverse of 20 Lire Gold Coins is Victor Emmanuel II. He reigned from 1861 until 1878 when he died. Emmanuel II was the first king of a unified Italy since the 6th century AD.

20 Lire Gold Coins issued between late 1878 and 1900 featured the bust of Umberto I. He reigned from 1878 until he was assassinated by an anarchist in July 1900, and oversaw Italy’s colonial expansion in the Horn of Africa and its Triple Alliance with the German Empire and Austria-Hungary.

The final bust of a King of Italy featured on 20 Lire Gold Coins is that of Victor Emmanuel III. The longest-reigning King of Italy, he reigned from 29 July 1900 following his father Umberto’s assassination through two world wars, and the rise and fall of Italian Fascism.

On the reverse of all 20 Lire Gold Coins is the coat of arms for the Kingdome of Italy. This simple depiction of the coat of arms includes the national seal of the kingdom with a crown atop the crossed shield. The shield is surrounded by olive and oak branches with the face value featured on this side.