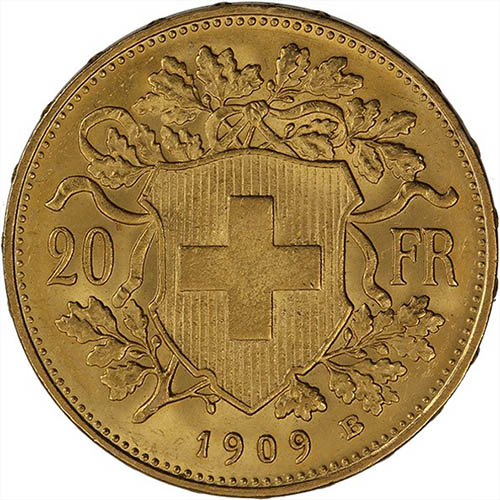 Each of the 20 Francs Gold Coins in this listing are in circulated condition and were coined by the Bern Mint in Switzerland from 1897 to 1935. The Swiss Gold Franc was additionally coined in 1947 and 1949, and the coins featured the popular Helvetia design on the obverse side.

Helvetia is a female personification representing the nation of Switzerland. She is traditionally depicted with a long, flowing gown and a spear in her right hand. The Swiss shield, with its characteristic cross, is situated at her feet and held by her left hand. Helvetia is commonly shown with braided hair held together with a wreath that symbolizes confederation of Switzerland.

On the obverse of the 20 Francs Gold Coin in this listing is the image of Helvetia, but this design from Fritz Landry differs from the traditional depictions of Helvetia. This design includes a left-profile portrait of the female figure wearing braided hair but lacking the wreath commonly used in her images. The background field has the massive peaks of the Swiss Alps framing Helvetia, and her name is engraved above.

The reverse of 20 Francs Swiss Gold Coins depicts the Swiss shield used in traditional visions of Helvetia. The shield has the Swiss flag emblazoned upon it, and the background features an ornate, decorative collection of oak leaves to frame the shield. Included on this side are the coin’s face value of 20 Francs as “20 FR” and a year of issue.

All 20 Francs Gold Coins listed here originated at the Bern Mint. Now officially known as the Swissmint, it was the official mint of the Swiss Confederation and though it’s been renamed, it is still located in the Swiss capital city of Bern.

If you have any questions, please contact JM Bullion. You can reach us on the phone at 800-276-6508, chat with us live online, or email us directly.