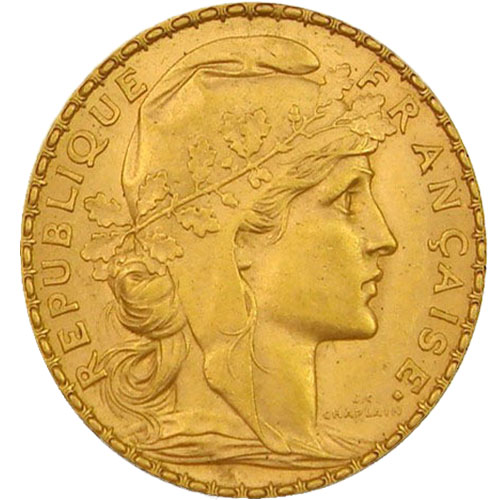 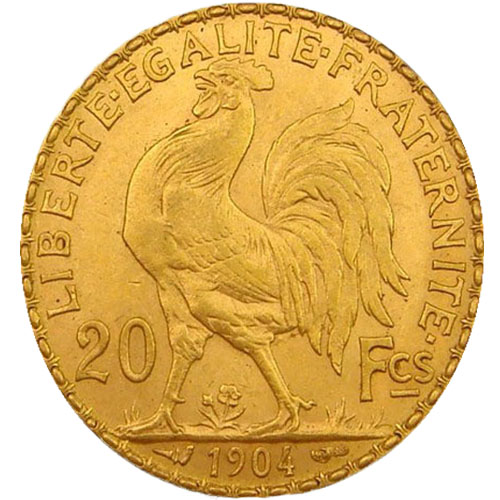 The 20 Francs France Gold coin was one of the most widely circulated denominations on the European continent in the 19th century. Eventually forming the backbone of the Latin Monetary Union, the 20 Francs denomination was introduced by Napoleon Bonaparte during the First French Empire. The coin continued in various designs through the 2nd French Republic following Napoleon’s defeat and was even used by the 2nd French Empire when Napoleon III ruled. Following his defeat and the establishment of the 3rd French Republic, the Paris Mint would eventually introduce this beautiful Marianne Rooster design on the 20 Francs coin in 1899. Now, 20 Francs Gold Coins with the Marianne Rooster design are available to you to purchase online from JM Bullion.

Perhaps the most famous 20 Francs Gold Coin is the Marianne Rooster design which comes from the Paris Mint. Introduced in 1899, the coin combined two popular symbols of the French nation during the 19th century. Marianne, the female personification of the country and representation of Liberty and reason features on the obverse. The reverse offers a more simple depiction of the Gallic Rooster, an unofficial national symbol for France.

On the obverse of the 20 Francs Gold Coin is the right-profile portrait of Marianne. Just as Lady Liberty is a symbol to the people of America, Marianne is a national symbol whose design on these coins was created by JC Chaplain. Marianne is a symbol of Liberty and reason to the French people, and her bust featured here is surrounded by the national name in French.

The reverse of the 20 Francs Gold Coin includes the nations unofficial symbol. Known better as the Gallic Rooster, this symbol of France is still used to this day by certain entities, with the French National Football team, as one example, using the Gallic Rooster as its official logo.

These 20 Francs France Gold Coins in the Rooster design are available to you with protective plastic flips when purchased through JM Bullion. These coins are About Uncirculated+ specimens, or Almost Uncirculated+ specimens. The names are interchangeably used, but the definition for the condition is the same. These coins present with only minor signs of wear on the highest points of the design element and still have full, original mint luster.

All date marks in the 1899-1914 production run of these coins are determined at random. We cannot accommodate requests for a particular date mark. If you buy more than one of these coins, it is possible you will receive several coins with the same date marks.

Please contact JM Bullion with any questions when buying gold by calling us at 800-276-608. Alternatively, our team is available to assist you on the web using our live chat or via our email address.