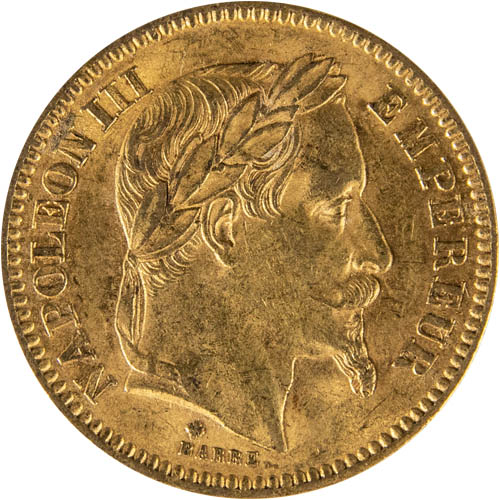 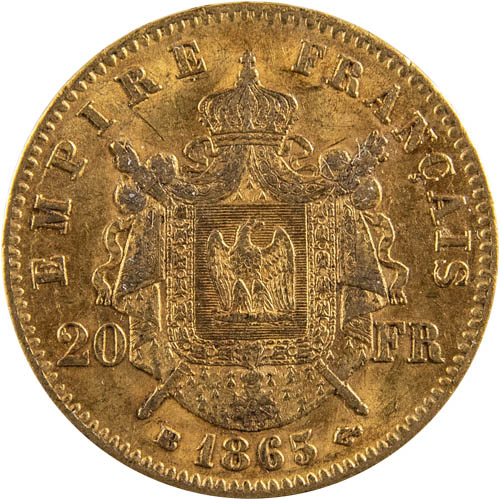 One of the most widely circulated denominations of the French Franc gold coin was the 20 Franc option. During the era of Napoleon III’s reign in France, the 20 Franc was one of the more heavily used denominations on an everyday basis. This denomination was also emulated beyond France’s borders by other nations and was eventually a core piece of the Latin Monetary Union. Today, 20 Francs France Gold Coins with Napoleon III’s effigy are available to you online from JM Bullion.

Napoleon III was one of the most popular emperors in French history. Despite his disastrous involvement in the Franco-Prussian War, a conflict that ended his reign, he is remembered for his modernization of the French economy, the grand reconstruction of Pairs that saw countless new boulevards and parks added to the city, and the expansion of the French overseas empire.

All of these 20 Francs France Gold Coins are available to you in Almost Uncirculated condition. Coins in this condition come with medium or near-full luster, with only extremely light or trace signs of wear and/or friction on the highest relief points of the coin. Each coin comes with its own protective flip for delivery.

JM Bullion offers these coins to you at random. We select coins to fulfill your order after your payment has cleared and can only select from available inventory at that point in time. As a result, we cannot guarantee a date mark or design in advance. If you buy several coins, please bear in mind you may get matching specimens.

The reverse side of 20 Francs Gold Coins also features two possible designs. From 1853 to 1860, a simple design with a wreath and the denomination at the center was used. From 1861 to 1870, the Imperial Coat of Arms of the French Empire is featured on the coins. Both design combinations came from Desire-Albert Barre.

Please contact JM Bullion with any questions when buying gold. Our team is available at 800-276-6508, online using our live chat, and via our email address.