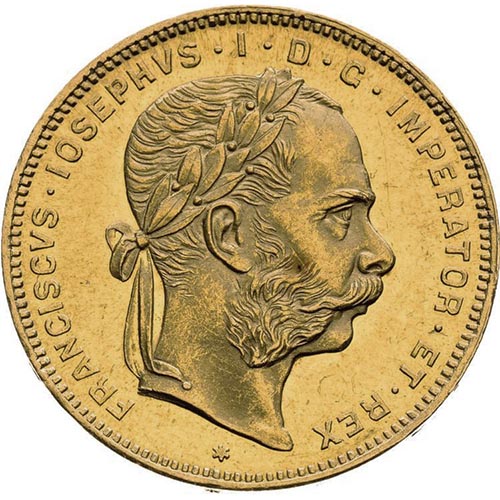 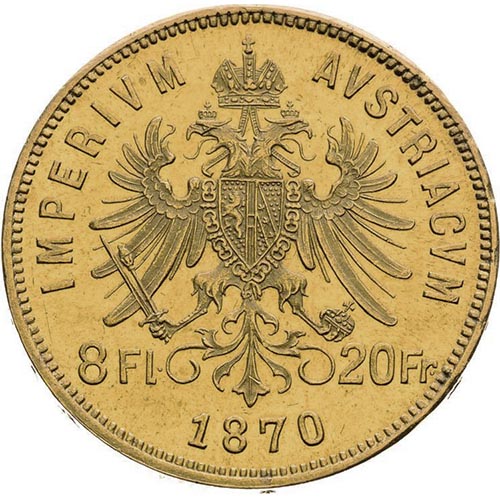 The French Franc currency has a deep history that reaches back to 1360. The former fiat currency of France, the Franc was available from 1360 to 1641 and reintroduced in 1795. Gold Francs debuted in 1803 under the rule of Napoleon Bonaparte, and the 20 Francs Gold Coin was a popular model for various other European nations. Today, 20 Francs Gold Coins from an Austrian restrike period are available to you today from JM Bullion.

The most popular denomination of Francs was the 20 Franc gold coin. Originating in France, the 20 Franc eventually served as the backbone of the Latin Monetary Union as the format for gold coinage replicated in nations from Belgium and Switzerland to Austria. The first Austrian 20 Francs gold coin was struck in 1870.

At the height of its size and scope, the Austro-Hungarian Empire encompassed large swaths of land in central and southern Europe. In 1870, the Austrian Mint issued a 20 Francs Gold Coin with the effigy of Franz Joseph I, Emperor of Austria-Hungary from 1848 until his death in November 1916.

These 20 Francs Gold Coins from the Austrian Mint are a restrike of the original coinage date marked 1892. The Austrian Mint struck the popular design one final time in 1892 with that year’s date as the year of issue on the coins. The coins have a unique standing as a dual-currency issue.

Each 20 Francs Gold Coin in this Austrian restrike issue has the 20 Francs face value as well as a value of 8 Florins. The coins were initially intended for use as a trade coin throughout the Austro-Hungarian Empire and beyond its borders.

On the obverse of the Austrian 20 Francs Gold Coin is the image of Franz Joseph I of Austria-Hungary. The Emperor served as the leader of the Austro-Hungarian Empire for nearly 68 years, leading the empire through its expansion in the second-half of the 19th century and into World War I in the early decades of the 20th century.

The reverse of the 20 Francs Gold Coins in this listing feature the crowned arms of the Austro-Hungarian Empire. The crowned arms includes a two-headed eagle with a sword in one talon and a crown in the other.

Please feel free to reach out to JM Bullion with your questions. You can call us at 800-276-6508, chat with us live online, or simply send us an email.