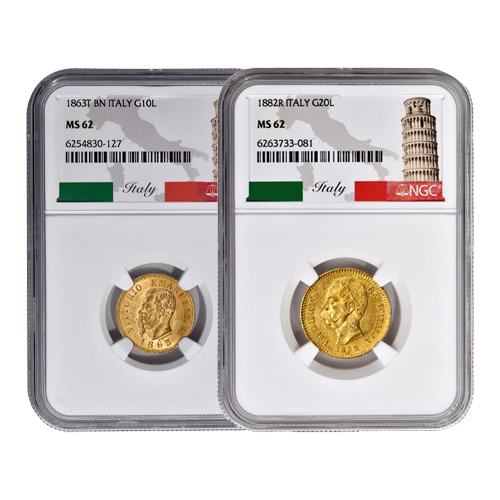 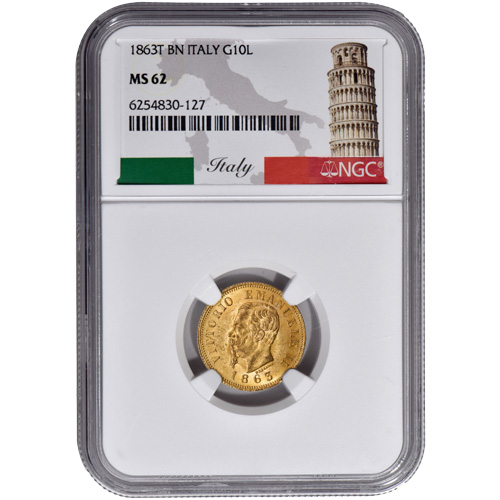 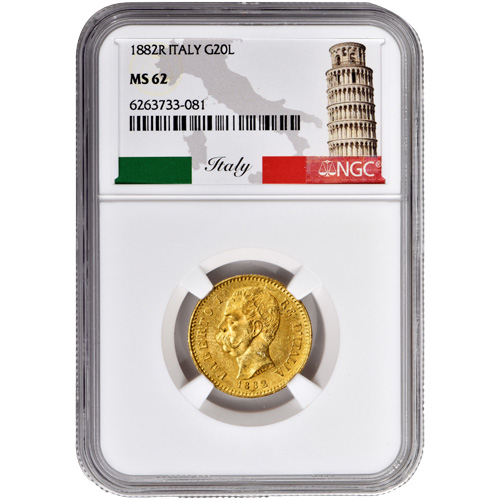 Italy has one of the worlds longest-running and richest histories when it comes to coining. From Ancient Rome to the city-states of the Middle Ages and the modern period, Italian coining has led the way as one of the most consistent in Europe. The last gold coins issued into circulation in Italy were introduced in 1861 following the formation of a unified Kingdom of Italy. Right now, 20 and 10 Lire Italian Gold 2-Coin Sets with NGC certifications are available to purchase online from JM Bullion.

Each of the 20 and 10 Lire Italian Gold 2-Coin Sets in this listing come with historic gold coins from the Kingdom of Italy. Both coins have earned Mint State 62 grades from the NGC. This indicates a coin that has impaired or dull mint luster. Possible flaws on the coins include detracting contact marks in the prime focal areas and the secondary areas of the visual field, as well as hairlines that are scattered throughout. Please note that these coins come with random date marks and we cannot guarantee the date marks you will receive in your set.

The gold coins of the Italian lira are based on some of the many historic forms of currency used throughout the region we now know as Italy. Gold, copper, bronze, and silver coining in this region started with the Roman Empire, continued through the Middle Ages and the Renaissance with the florin, and ultimately culminated in the Italian lira of the Kingdom of Italy in 1861.

The obverse of the 20 and 10 Lire Italian Gold Coins in this 2-Coin Set features a portrait of the reigning monarch from the Kingdom of Italy. When the coins were first issued in 1861, Victor Emmanuel II was the King of Italy and had previously been the King of Sardinia. His reign as King of Italy within a unified kingdom was short-lived, lasting until his death in 1878. Other possible portraits include those of Umberto I and Victor Emmanuel III. These will vary based on the date on the coin.

On the reverse side of the coins in the 20 and 10 Lire Italian Gold 2-Coin Set is the coat of arms of the Kingdom of Italy. The coat of arms includes a crossed shield at the center that is topped by a crown and flanked by a wreath. The coins have slightly different inscriptions. The 10 Lire coin features an Italian inscription around the field with the face value, while the 20 Lire coin lacks that inscription, but does feature its own face value.