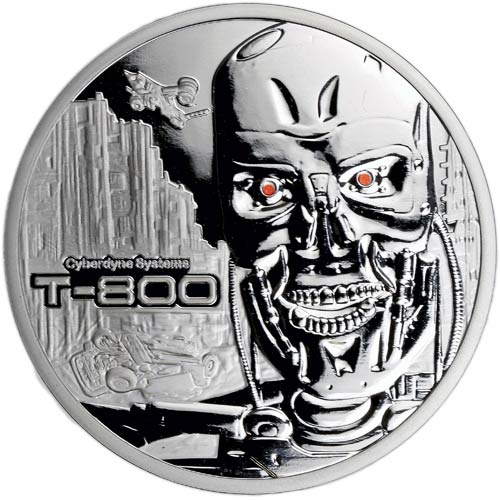 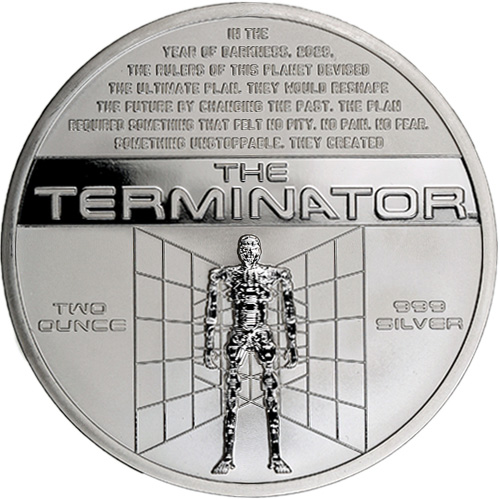 There are few characters more iconic in American cinema history than the Terminator. In the role that made his career, Arnold Schwarzenegger played the role of the nearly indestructible cyborg from the future that had returned to the past to kill Sarah Connor, and later her young son. Right now, the 2 oz Stardust Terminator T-800 Silver Round is available to purchase brand new from JM Bullion.

When the first film in the Terminator franchise launched in 1984, Schwarzenegger’s status as an American action hero was cemented forever. He played the title role of the Terminator machine, a cyborg sent back in time from 2029 to 1984 by Skynet to remove the threat that Connor poses in the future.

The T-800 cyborg played by Schwarzenegger was an indestructible machine that was created by Cyberdyne Systems. These 2 oz Stardust Terminator T-800 Silver Rounds are brilliantly crafted by Michael S. Berman and sculpted by Heidi Wastweet, a renowned metal sculptress.

On the obverse side of each round you’ll see the image of the Terminator’s face, which reflects exactly that T-800 model seen in the feature films released during the original production run for the franchise. The round comes to life with the addition of two red eyes, indicating the machine is on and ready for destruction.

The reverse of the 2 oz Stardust Terminator T-800 Silver Round depicts the full blueprint of the Cyberdyne Systems cyborg, along with engravings that identify the weight, purity, and metal content of the round and the name of the round series. Included at the top is the full text of the tagline from the beginning of the original film in 1984.

Stardust Silver is proud to call “The Silver State” of Nevada its home, with a base in Las Vegas. Each of these silver rounds was produced by Sunshine Mint, located just north in Coeur d’Alene, Idaho. Sunshine is one of America’s largest private minting facilities.

If you have any questions, please don’t hesitate to ask. You can reach a JM Bullion associate on the phone at 800-276-6508, online using our live chat, and via our email address.