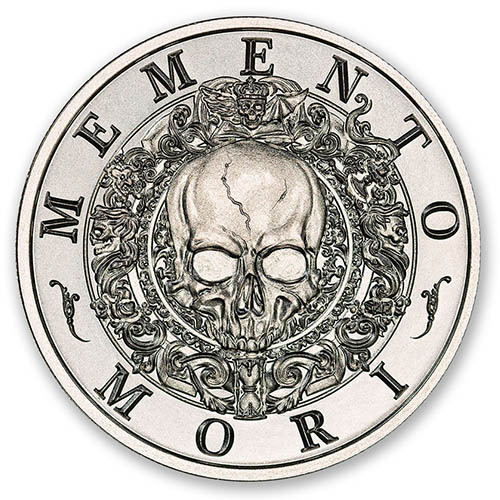 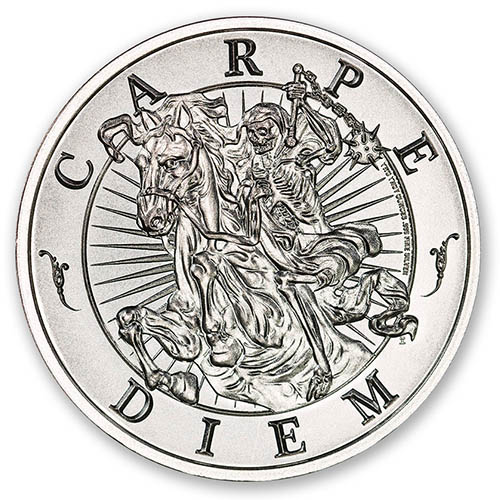 Intaglio Mint has developed a number of impressive silver round collections in recent months. The private mint is the definition of a boutique mint, with just three silver enthusiasts powering the design and production of silver rounds for sale. Now there’s a new series available from Intaglio known as the Latin Allure Series. Right now, 2 oz Memento Mori Silver Rounds are available to purchase online from JM Bullion.

The Latin Allure Series brings design concepts inspired by the Ancient Roman societies and other Latin cultures of the era. The first of these designs is inspired by the practice of victorious generals parading through the streets of major Roman cities in celebration of their victory on the battlefield.

Though returning home to a parade in their honor, alive and well, these generals often needed a reminder that live and mortality are fleeting. It is said that a slave once uttered to his master, a general, the phrase “Memento mori.” Translated from Latin, the phrase instills in the mind of the general that they must “remember that you too will die.”

Morbid to the modern world, Memento mori remains a powerful lesson in the value of conceptualizing one’s mortality. The Roman lyrical poet Horace lived during the time of Augustus, and famously captured the need to act now reminding people that “you are mortal, so seize the day.” Intaglio Mint brings these concepts to life beautifully on the 2 oz Memento Mori Silver Round.

On the obverse of the 2 oz silver rounds is the word “Memento” along the top of the design field, with “Mori” along the bottom of the design field. In between, there is a human skull in the center with significant designs at specific hour marks. An hourglass at 6 o’clock reminds all that time is fleeting. A crowned skull at 12 o’clock has wings of good and evil, offering a depiction of the ascent to heaven.

The reverse of the 2 oz Memento Mori Silver Round includes another popular Latin phrase of “Carpe Diem.” The words are split with the former at the top of the field and the latter at the bottom of the field. The words are separated in the center by a draped skeleton riding the mount of an apocalyptic horse brandishing a medieval spiked flail.

If you have any questions about these new silver rounds for sale, the customer service team at JM Bullion is here to help. You can call us on the phone at 800-276-6508, chat with us live online, or email us directly.

Dirk from CO - June 14, 2019
"This is a great looking round and the shipping was exceptionally fast. Momento Mori is an excellent addition to my collection. Thanks"