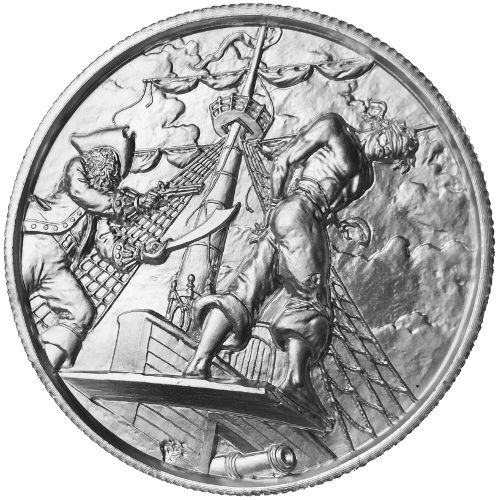 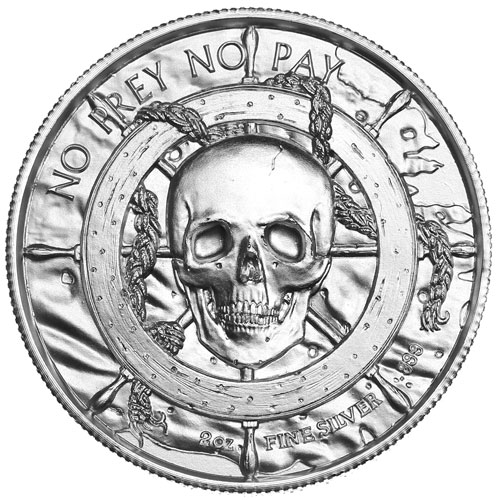 The Privateer Series of silver rounds from the Elemetal Mint has brought the world of pirates and the high seas to life on brilliant ultra-high relief proof rounds. In the fifth release of the series, Elemetal Mint brings a common story of pirate life to you as a mutineer is sentenced to walk the plank. Right now the 2 oz Elemetal The Plank Silver Ultra High Relief Round is available to purchase from JM Bullion.

When a ship captain discovered that one of his underlings was derelict in his duties or interested in a mutiny, the common sentence was to send that individual down the plank. With their hands bound behind their back, that individual stood little chance of surviving once tossed overseas into Davey Jones’ locker.

As the fifth release in the Privateer Series, the Elemetal Mint continues its trek through the life of high-seas drifters with another stunning design. This follows in the release of the pirate-themed designs of the overall series, including the use of the common reverse design elements.

The reverse side of the 2 oz Elemetal The Plank Ultra High Relief Silver you’ll find the image of the pirate ship’s wheel, featuring a rope wrapped around the wheel and a human skeleton set in the very center. The pirate motto “No Prey, No Pay” is featured on this side along with the weight, purity, and metal content of the round.

On the obverse of each Elemetal The Plank Ultra High Relief is the image of a poor soul who’s been sentenced to death by walking the plank. As the pirate captain stands behind him with a gun and sword out to push him along, the mutineer approaches the edge of the plank with his eye’s covered and hands bound behind his back.

Each of these 2 oz Elemetal The Plank Ultra High Relief Silver Rounds is a high-relief striking, which requires a silver blank to be struck multiple times to create the 3D finish that helps bring the imagery to life on the round.

Elemetal Mint is a private minting facility, and now is the largest in the United States. It was formed in 2014 as a collaborative effort of NTR Metals, Provident Metals, and Ohio Precious Metals, with the latter transforming its Jackson, Ohio facility into the new Elemetal Mint refinery.

If you have any questions, please don’t hesitate to ask. JM Bullion associates are available at 800-276-6508, online using our live web chat, and via our email address. To see similar products check out our full section of Elemetal Silver Rounds.

Daryl from PA - April 28, 2017
"I have all five of the elemental privateer rounds, absolutely brilliant pieces. Just picked up more of the plank rounds, the detail on this piece is stunning. Elemental did an outstanding job with this series hope to see more. Thanks JM, fast shipping A+++"

James from MA - November 16, 2016
"Great detail! I have all 5 & this one is 3-deminisional - excellent artistry on this one. The Kraken is an other amazing one - the entire collection in superb in general with crisp micro-detail! Get the loop out!"

Duane from WI - August 24, 2016
"I own all 5 of the series and will continue to buy the entire series, because they are absolutely gorgeous, but the only problem I have is what is the mintage on these and how many are in the series. Will I someday be buying #17 of the privateer round"