The 2016 issue schedule for KOMSCO represented an extensive expansion of the mint’s annual bullion releases, particularly to global authorized dealers. As such, the profile of the mint itself has risen dramatically in the past three years. This rise was powered by the Silver Chiwoo Cheonwang, and the Korean Tiger bullion collection. What started as a gold bullion issue has now grown again for KOMSCO, with the 2018 release schedule offering the first-ever Korean Tiger Silver Coin.

While the most well-known tiger species is the Siberian tiger, the historic range of these majestic beasts is less well known by many today. The name helps to, in part, throw people off the scent of this big cats historic homelands. Named for the far-eastern reaches of Russia, the Siberian tiger was once also prevalent throughout northeastern China and the entire Korean peninsula. In fact, the tiger has played a large role in the mythology and culture of Korea for centuries.

The new 2018 1 oz Korean Silver Tiger Coin is currently available for presale through JM Bullion, and we’re happy to take the time to provide an in-depth look at this exciting series from KOMSCO. 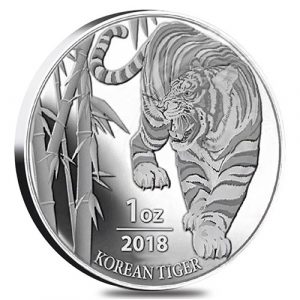 On the obverse of 2018 Korean Tiger Silver Coins is the image of the cat’s full body as it stalks its prey through some foliage. The massive cat’s powerful jaws are open wide as it lets out a warning howl to any creatures nearby. Engravings on the coin are clustered in the bottom-middle of the design field and include “1 oz,” “2018,” and “Korean Tiger.”

The reverse of the 1 oz Korean Tiger Silver Coin features a design element used on the reverse of all coins in the collection since 2017. This image depicts the outline of the Korean peninsula, with no demarcation visible between North Korea and South Korea. Instead of focus on geopolitical boundaries, the stylized mapping of the peninsula focuses on the shared history of Korean people and the prominence of the tiger in that shared culture and mythology. Engravings on this face include “Republic of Korea” above and “Fine Silver 999” below. To one side of the peninsula depiction is the traditional red-and-blue Taeguk from South Korea’s national flag.

Though captured on this coin in pure silver, the Taeguk is based upon the philosophy of um-yang and represents the balance of the universe. To the right of the peninsula depiction is a latent security image used by KOMSCO that reflects the metal content and purity of the coin.

KOMSCO introduced the Korean Tiger Series in 2016 with a gold coin for sale with available weights including a 1 oz, ½ oz, and ¼ oz gold option. Each of the issues was strictly limited in its mintage to the following:

With the release of the 2018 1 oz Korean Tiger Silver Coin, KOMSCO has limited the issue of the coins to just 30,000 silver bullion coins in total. Now all that’s left to cover is that matter of that name. What is a Korean Tiger?

History of Tigers in Korea

The Siberian tiger is the species featured in this design, and is in fact the species historically identified as the Korean tiger. Throughout the Far East, people and nations have referred to the Siberian tiger based upon their geographic sightings of the large cats. Up until the early 20th century, the Siberian tigers lived throughout the Korean peninsula and were referred to locally as Korean tigers. There are records of the Korean tigers populating the width and breadth of the peninsula, and even existing in isolated populations on Jindo Island. The island, now connected to the mainland by the Jindo Bridge, was previously cut off and sits some 500 meters off the southwestern tip of the Korean Peninsula.

In Korean culture, the tiger is a popular subject of artwork ranging from paintings to sculptures. The tiger is viewed as a guardian that can drive away evil spirits, while also serving as a sacred animal that can bring people good luck. In Korea, the tiger is a symbol of courage and absolute power, and was closely associated at times with the Joseon Dynasty which ruled Korea for more than 500 years until the late 19th century.

The Growth of KOMSCO

KOMSCO was founded during one of the most turbulent periods of modern Korean history. Following the end of World War II and the brutal Japanese occupation of the peninsula, the region was thrust back into chaos with the onset of the Korean War and the split of the nation into the Democratic People’s Republic of Korea and the Republic of Korea (South Korea). On October 1, 1951 the Korea Minting Security & Printing Co. was founded to established stable production and supply of national security products ranging from currency to securities.

Today, KOMSCO exports bank notes, coins, paper products, special inks, and passports to over 40 countries around the world. It continues to work on the latest advancements in anti-counterfeiting technology and strives to become one of the top-five minting operations in the world.

Don’t forget, the 2018 1 oz Korean Tiger Silver Coin is now available for presale online with JM Bullion. Keep a close eye for the possible arrival of Korean Gold Tigers in the future and follow us on Facebook to learn about the latest coin releases arriving in our online portfolio. Whenever you have questions, you can always give us a call at 800-276-6508, reach out to us online through our live chat, or simply send us an email with your inquiries.