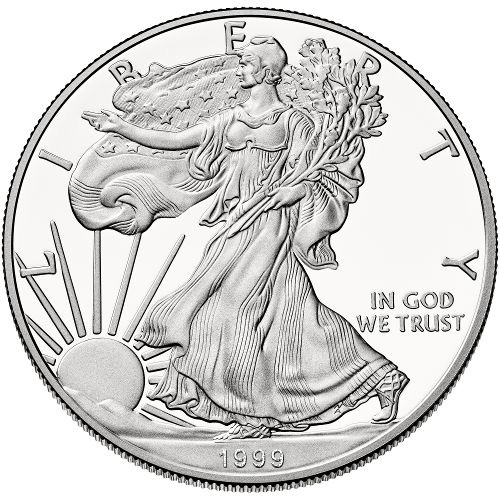 The year 1999 marked one of just two years when the American Silver Eagle coin was struck in both proof and bullion versions by the Philadelphia Mint. It was also a time of growing demand for the coins, with Y2K driving fears of a potential economic catastrophe in the US. The 1999-P Proof American Silver Eagle coin is available right now on JM Bullion with a commemorative box and CoA.

The year 1999 also marked a significant boost in production and demand. The approach of Y2K was generating fears of turmoil in the stock market, driving investors to purchase silver and gold bullion. The overall production of American Silver Eagles jumped from 5.2 million in 1998 to 7.9 million in 1999.

While the bullion version of the coin experienced a jump of nearly 3 million coins in this one-year period, proof coins saw a more modest mintage increase of just 149,000 compared to 1998.

On the obverse face of the American Silver Eagle is Adolph A. Weinman’s timeless Walking Liberty design. Originally created in 1916, it was used on the nation’s half-dollar coin from 1916 to 1947.

The reverse feature the heraldic eagle. Created by John Mercanti, this official seal of the US is surrounded by engravings that include “United States of America,” “E Pluribus Unum,” and the coin’s weight, metal content, purity, and face value.

Please direct any questions you might have to a JM Bullion associate. We’re available at 800-276-6508, online using our live web chat, and via our email address.