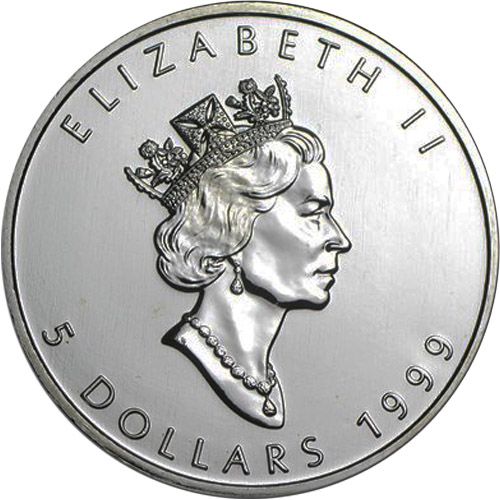 After a decade of dropping mintage figures, the Canadian Silver Maple Leaf coin came roaring back to life as Y2K fears increased and the century came to an end. While silver prices remained steady, fears over the impact of Y2K meant investors turned back to precious metals in this era. Right now, 1999 1 oz Canadian Silver Maple Leaf Coins are available to purchase online from JM Bullion.

The 1999 issue of the Canadian Silver Maple Leaf was the second-highest mintage of the coin in 1990s. Much of the decade was marked by strong stock performance in global markets and higher, but steady, silver prices. However, Y2K fears came to a head between 1999 and 2000, sinking markets and pushing investors back toward precious metals.

On the obverse of 1999 1 oz Canadian Silver Maple Leaf Coins you’ll find the third-generation effigy of Queen Elizabeth II. Created by Dora de Pedery-Hunt in 1990, this right-profile portrait captures the Queen in a more regal design with engravings of the coin’s face value, year of issue, and Elizabeth II’s name.

The reverse of all 1999 Canadian Silver Maple Leafs includes the sugar maple leaf design. This image brings the national emblem to a beautiful bullion coin in a design created in 1979 by Walter Ott.

Founded in 1908, the Royal Canadian Mint is Canada’s official sovereign mint. The mint operates two facilities that include its original operation in Ottawa and a newer facility opened in Winnipeg in the 1980s.

If you have any questions, please contact JM Bullion at 800-276-6508, chat with us live online, or send us an email with your inquiries. The price of silver today is listed on our website and constantly updated.