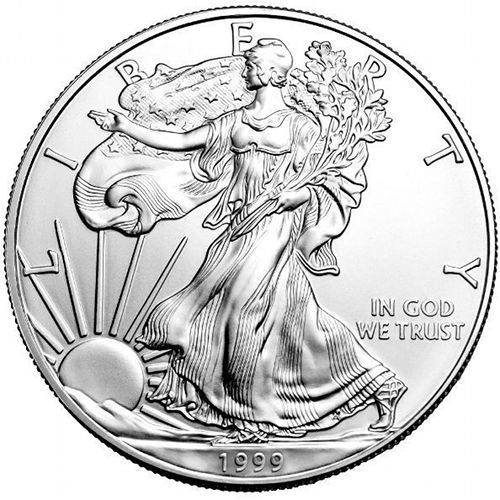 As the 20th century came to a close, there were fears that the strong growth of Internet-based companies was about to fall apart; fears that would be proven true later. Those economic uncertainties, coupled with rising precious metal prices, helped drive the popular of silver bullion coins higher.

In 1999, the American Silver Eagle coin saw overall production increase from 5.2 million the year before to 7.9 million. The bullion coin was responsible for much of that growth, jumping from 4.8 million to 7.4 million. The 1999 American Silver Eagle proof also posted strong growth, with mintage jumping nearly 100,000 coins from 450,000 to 549,796. That figure was very near the 550,000 cap placed on proof production by the United States Mint that year.

The 1999 American Silver Eagle marked the first time since 1992 that both the bullion and proof versions of the coin were struck at the same facility. The San Francisco Mint struck both versions from 1986 to 1992, but the proof specimen shifted to Philadelphia starting in 1993, and was followed in 1999 by the bullion version.

If you have any questions, please don’t hesitate to ask. JM Bullion associate are available at 800-276-6508. You can also contact us online using our live chat and email features. For other grades and editions of this particular piece, be sure to check out our Certified Silver Eagles as well as our Uncirculated Silver Eagles.