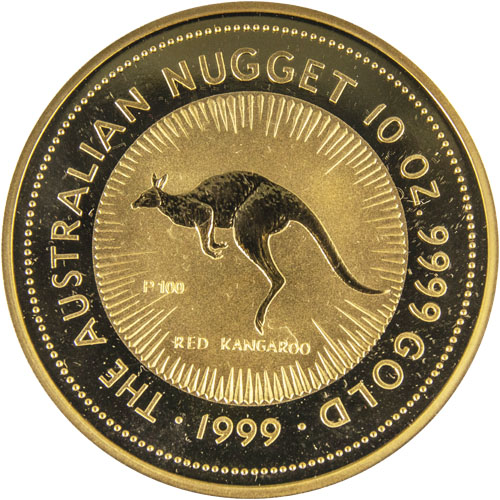 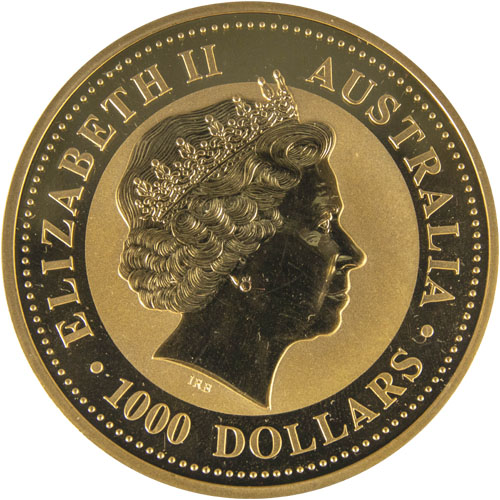 JM Bullion is pleased to offer you a special 1999 Australian Kangaroo coin consisting of 10 Troy oz of gold! When the Perth Mint launched its Kangaroo series back in 1987, it became an instant success. The Mint expanded the collection in 1991 to include 2 oz, 10 oz, and kilo versions. The 10 oz version featured the same Kangaroo design with each release and was issued by the mint up until 2009. Right now, 1999 10 oz Australian Gold Kangaroos are available to purchase online from JM Bullion.

The Red Kangaroo is the world’s largest marsupial, with some adult males standing nearly six feet in height. These majestic creatures reside in the arid desert of Australia and subsist mainly on grass and herbage. They are specifically suited for dry regions and can survive with little water, as the moisture found in their food is sufficient for their survival. Female Red Kangaroos give birth to one baby at a time, and upon delivery, their joey will reside in the mother’s special pouch for 8-10 months until emerging to live independently.

The obverse of 1999 Australian Gold Kangaroos features Elizabeth II. In this design by Ian Rank-Broadley, Her Majesty is seen in right-profile relief wearing the Girls of Great Britain and Ireland Tiara. This portrait was introduced in 1998 and has since been used repeatedly on coins throughout the Commonwealth nations. Inscriptions on the obverse read Elizabeth II, Australia, 1000 Dollars.

On the reverse field of 1999 10 Gold Kangaroos, there is a depiction of a Red Kangaroo. This iconic marsupial appears facing the left side as they bound through the air. This is the standard Kangaroo design used on all of the 10 oz Gold Kangaroos produced between 1991 and 2009. Inscriptions read The Australian Nugget, 10 oz, .9999 Gold, 1999, Red Kangaroo.

Each 1999 10 oz Australian Kangaroo will arrive inside a protective plastic capsule. These remarkable specimens were produced directly at the Perth Mint and are considered legal tender by the government of Australia.

If you have any questions about gold for sale, please feel free to ask. JM Bullion customer service is available at 800-276-6508, online using our live chat, and via our email address.