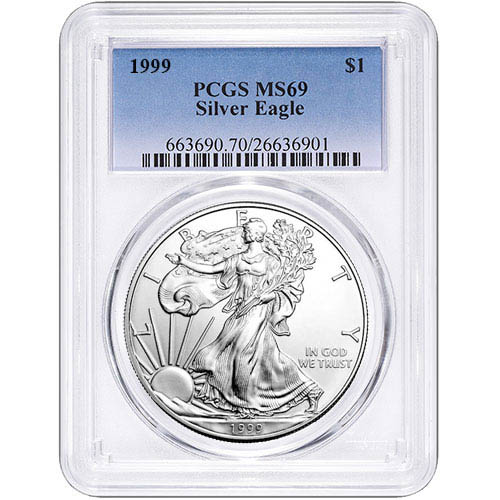 As the 20th century neared its end, the American Silver Eagle program experienced surging demand. The predominant driving factor in growth during the late 1990s was fear surrounding the uncertain impact of Y2K on computer networks that had significantly altered everyday life around the world. This helped push American Silver Eagles to the second-highest mintage since the program’s introduction in 1986. Right now, 1999 1 oz American Silver Eagle Coins are available to purchase online from JM Bullion with PCGS certification.

Each 1999 1 oz American Silver Eagle coin in this listing earned a near-perfect certification of Mint State 69. Coins in this condition exhibit full, original mint luster with a maximum of two minor detracting flaws. These flaws are limited in nature to minuscule contact marks or hairlines.

1999 was an exciting year in the American Silver Eagle Series in a number of ways. First and foremost, the bullion coins were struck at a new mint facility for the first time in program history. Though the silver bullion version of the coin carries no mint mark, it was known to be struck by the San Francisco Mint from 1986 to 1998. In 1999, the Philadelphia Mint took over the responsibility of coining for the bullion Silver Eagles.

On the obverse of 1999 American Silver Eagles is the vision of Walking Liberty created in 1916 by Adolph A. Weinman. The design depicts Liberty in left-profile relief as she walks from right to left across the coin’s design field. The reverse side of 1999 1 oz American Silver Eagles features the heraldic eagle of the United States. This is a modernized version of the seal and was created by John Mercanti in 1986.

Silver prices in 1999 remained steady compared to recent years. The average price throughout the year remained in the low-$5 range, settling at $5.22 per ounce. Silver traded as high as $5.70 per ounce and as low as $4.90 per ounce.