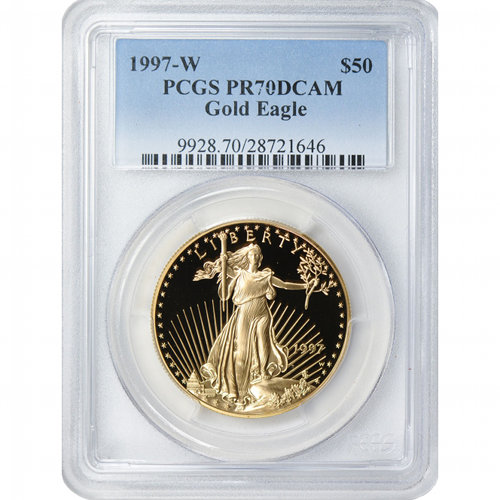 American Gold Eagle coins bear the images of some of the greatest symbols in American history. The bald eagle has served as the official emblem of the nation since 1792, and Lady Liberty has stood guard over New York Harbor since 1886. Today, both images appear on the nation’s official gold bullion coin. Right now, the 1997-W 1 oz American Gold Eagle proof is available in perfect condition from JM Bullion.

Each 1997-W 1 oz American Gold Eagle available for purchase right now is considered a perfect specimen by the PCGS. Proof coins with a PR70 grade have full, original mint luster, and no detracting flaws of any kind.

The deep-cameo finish of these coins is quite unique. The design set of Lady Liberty (obverse) and the bald eagles (reverse) have a strong, frosted finish. Conversely, the background field on both sides is deeply-mirrored and clear, creating an immense visual contrast between the two fields.

On the obverse you’ll find Augustus Saint-Gaudens’ 1907 depiction of Lady Liberty. The reverse of each coin features the image of a family of nesting bald eagles, created in 1986 by artist and sculptor Miley Busiek.