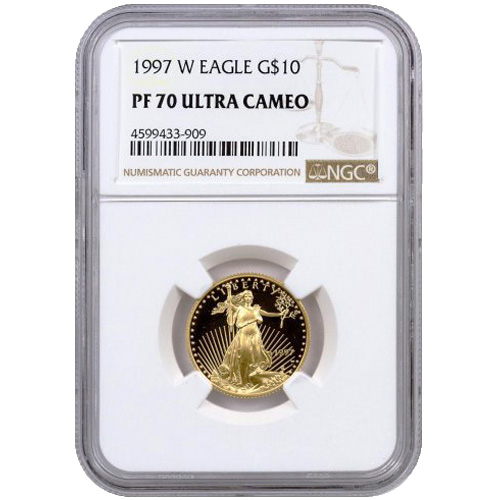 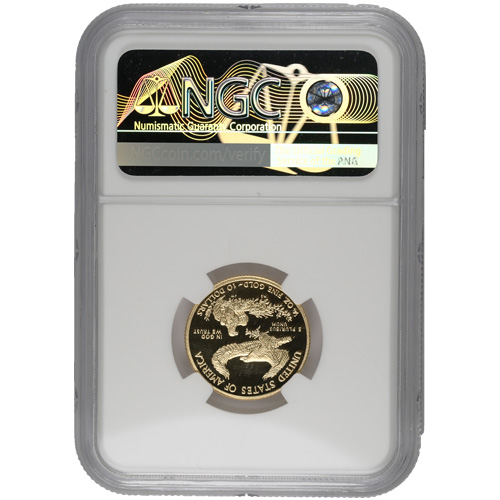 The 1997 Proof American Gold Eagle coin experienced a dip in demand that continued through the late 1990s. From 1996 to 1998, the Proof Gold Eagles dropped from the stable issues of the early 1990s and wouldn’t rebound fully until the 20th anniversary in 2006. Right now, the 1997 1/4 oz Proof American Gold Eagle Coins are available to purchase online from JM Bullion in perfect certification.

Each 1997 1/4 oz Proof American Gold Eagle Coin is available to you with a perfect certification from the NGC. Coins with a PF70 certification exhibit full, original mint luster and include no detracting flaws of any kind on the surface areas or design elements.

The 29,805 coins released in 1997 marked a low point in the collection to that point. Only the 1998 coins and those issued in the 2010s following the Great Recession have seen lower mintage figures than these 1997 1/4 oz Proof American Gold Eagles, making them some of the more valuable collectible pieces today.

On the obverse face of all 1997 1/4 oz Proof American Gold Eagle coins is an iconic image of Liberty. Created in 1907, this vision of Liberty was revolutionary in its day and showcased the nation’s vision of freedom in a powerful and confident pose. Liberty walks forward with the US Capitol Building behind her and the sun rising to frame her figure.

The reverse side of the 1997 Proof American Gold Eagles exhibits the design of American bald eagles created in 1986 by Miley Busiek. A gifted designer, Busiek’s artwork appears only on the American Gold Eagle and features a male eagle flying above the nest, which houses a female and hatchlings.