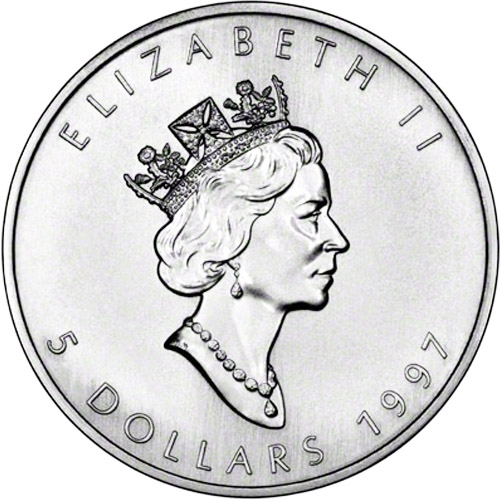 On the obverse of the 1997 1 oz Canadian Silver Maple Leaf coins youll find the right-profile portrait of Queen Elizabeth II. This depiction of Her Majesty is the third-generation design of Elizabeth II. Of the four portraits of Queen Elizabeth II to feature on Canadian coins to date, this one appeared for just 12 years, just one year longer than the shortest lived design in the first generation from 1953 to 1964.

The reverse of Canadian Silver Maple Leaf Coins bears the sugar maple leaf. Designed by Walter Ott for the Gold Maple Leaf in 1979, this design is the definition of staying power. It has been on Canadian Maple Leaf coins since 1979 and now features on the silver, platinum, and palladium versions of the coin as well.

The Royal Canadian Mint opened in 1908 to provide Canada with its own coining capacity, as well as to help refine gold and other precious metals discovered in the Yukon Territories in the late 1800s.

If you have any questions, please feel free to reach out to JM Bullion. You can call our customer service team at 800-276-6508, chat with us live online, or simply email us.