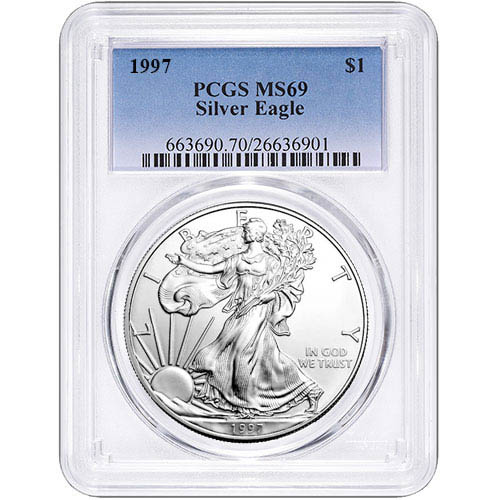 The American Silver Eagle coin started to show signs of life in the late 1990s and that began with the increase in demand that 1997 saw compared to the year before. The silver coins for sale in the series rebounded from a record low to jump nearly 700,000 coins in total for 1997. Right now, 1997 1 oz American Silver Eagle Coins are available to purchase online from JM Bullion with PCGS certification.

Each 1997 1 oz American Silver Eagle Coin in this listing is available to you in near-perfect condition. The PCGS issues a Mint State 69 certification to coins that exhibit full, original mint luster with a maximum of two minor detracting flaws. Those flaws are limited to minuscule contact marks or hairlines and must occur outside the primary focal areas of the coin.

On the obverse of 1997 1 oz American Silver Eagle is the depiction of Liberty created by Adolph A. Weinman. This design was created in 1916 and appeared on the half-dollar coin until 1947. This image captures Liberty in left-profile relief with the American flag on her shoulders.

The reverse of 1997 Silver Eagles includes the heraldic eagle of the United States. Modernized in 1986 by John Mercanti, the image includes the American bald eagle and the US national shield. The eagle clutches the arrows of war in one talon and the olive branch of peace in the other.

If you have any questions, please feel free to contact JM Bullion. You can reach us on the phone at 800-276-6508, chat with us live online, or email us directly.