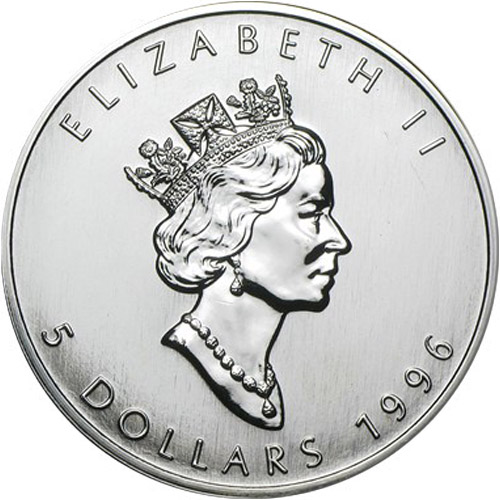 The 1996 issue of the Canadian Silver Maple Leaf Coin from the Royal Canadian Mint marked a third straight year of declining mintage of the coins. Sinking demand for silver bullion was largely the result of rising silver prices at a time when stock markets were strong, leaving many investors to seek a higher yield from market investments rather than silver coins. Today, 1996 1 oz Canadian Silver Maple Leaf Coins are available to you online from JM Bullion.

On the obverse of Canadian Silver Maple Leafs is the image of Queen Elizabeth II. The portrait of Her Majesty featured on these coins debuted on Canadian currency in 1990, and is known as the third-generation portrait of the Queen for Canadian coins. Created by Dora de Pedery-Hunt, this image was on Canadian bullion and circulation coins through 2002.

Please feel free to contact JM Bullion when you have questions about silver for sale. Our customer service team is available at 800-276-6508, online through our live chat, or by simply sending us an email.