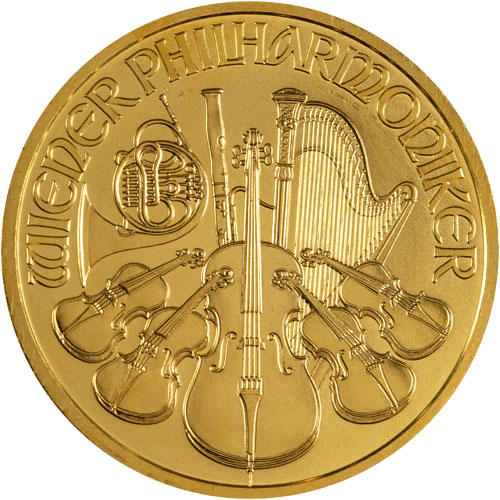 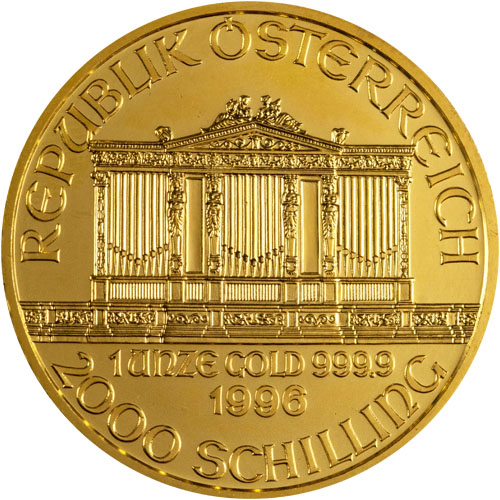 The Gold Philharmonic was introduced in 1989 in a period when many countries were issuing their first 1 oz gold bullion coins. It all started with the Gold Krugerrand from South Africa in 1967. Next came the celebrated Canadian Gold Maple Leaf in 1979. Then the 1980s saw an influx of many now-iconic coin programs, including the Chinese Panda, the British Britannia, the American Eagle, and the Austrian Philharmonic.

Each 1996 Austrian Gold Philharmonic Coin was produced by the Austrian Mint and is considered legal tender by the government of Austria. These coins consist of .9999 pure gold and will arrive to you inside individual plastic flips. Please note that due to their age, these pieces are not considered to be in BU condition. Whether you love music or simply want to invest in high-quality gold, the Philharmonic could be a great option for you.

The obverse of 1996 1 oz Austrian Philharmonic Coins features a majestic pipe organ. This organ is located in the Wiener Musikverein, which is the home of the Vienna Philharmonic orchestra. In addition to this marvelous design, there are also inscriptions on the obverse that read Republik Osterreich, 1 Unze Gold 999.9, 1996, 2000 Schilling.

On the reverse face of 1996 1 oz Gold Philharmonic Coins there are a series of instruments that would typically be used in the Vienna Philharmonic orchestra. These include a cello, Vienna horn, bassoon, harp, and four violins. Inscribed across the upper rim are the words Weiner Philharmoniker.

We encourage JM Bullion customers to reach out to us with questions about buying gold. You can call us at 800-276-6508, chat with us live online, or simply send us an email with your inquiries.